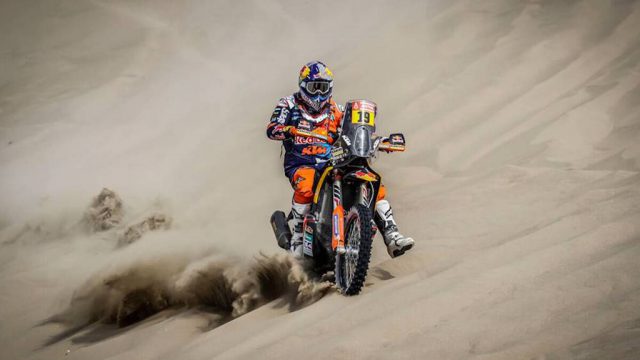 Impressive performance from Sunderland and Price

Day three of the 2018 Dakar was pretty harsh for the riders trowing at them around 300 km of off-track racing in the Ica Desert. The dune experts got the opportunity to prove their skills again on today’s long special of 296km. The top gun riders switched places in the lead while amateur and experienced riders faced withdrawal.

Spanish rider Joan Barreda, the winner of yesterday’s special, was the first to start the liaison today. Unfortunately, today the HRC rider was out of pace and crossed the finish line almost 28 minutes behind the leader. Barreda had some navigation issues that delayed him big time. He got lost at some point in the special after missing a left-hand bend.

The official KTM rider Sam Sunderland put on a show today. He was determined to regain ground after yesterday’s average performance. The British rider put on a good fight with team-mate Toby Price that seemed in a terrific shape. After 100 km of special, he was in the leading platoon with Toby Price leading by 11 seconds and Pablo Quintanilla 42 seconds behind. Overall he was the top finisher of today’s special with a time of 3h 20m 43s.

Toby Price the second Official KTM star still has it. He had an extraordinary performance in today's special after a modest start-up in the 2018 Dakar. Price is the 2016 winner and, he comes after a year of injuries an no racing but, he seems determined to give his best for 2018 Dakar.

“Today was not so bad. It was definitely difficult with the navigation and stuff. We had a couple of small crashes and I blew the end of my camel-back, so I’m a little bit dry at the moment. The navigation tower wasn’t rolling my road-book through, so I was having to do it manually sometimes. It was a little bit difficult in that second part, but we’re here and that’s the main thing, so we’ll just see how the rest of the rally goes. The pace is definitely here and we know we can still run at the front. We’re going to make sure we look after the bike, look after ourselves and avoid making those little crashes where the bike kind of chased me a little bit and landed on top of me a bit. But all-in-all, it was a good day. We’re here at the finish of day three, so now it’s day four to go”.

The big surprise of the third day is the Argentinian rider Kevin Benavides. Today's performance is his best stage finish, coming 2nd behind Sam Sunderland. The Honda rider finished 4th in the 2017 Dakar and, he feels confident after today’s performance.

“It’s been a really good day for me. It was very difficult. The terrain changed a lot of times and we had different types of dunes: hard and soft. At the end of the stage, the navigation was very tricky. I got near to the front at the end so I think it was a really good stage for me”