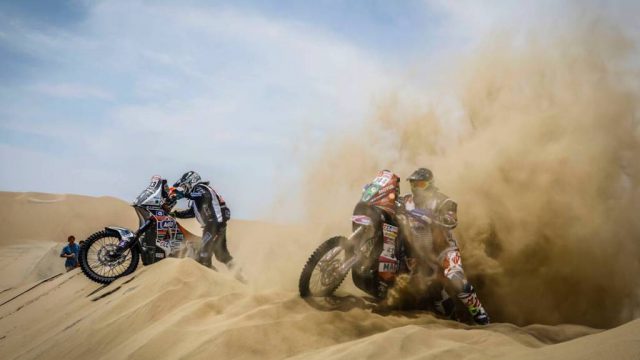 The stage two of the 2018 Dakar features a circular route that will start and finish in the city of Pisco. Day two consists of a short liaison of 12 km and a demanding 267km timed special in sandy conditions marking the first difficult stage of the hardest rally in the world.

Joan Barreda Bort was the top finisher after today’s timed stage. You might remember him from last year’s rally for being the rider that got an hour penalty. Otherwise, he would have been the Dakar 2017 winner. The official HRC rider won the stage thanks to a late push in today’s special crossing the finish line 3 minutes ahead of Adrien van Beveren.

Yesterday leader Red Bull KTM Factory team rider Sam Sunderland was the first to set of in today’s special. As a road opener, he had a heavy task being the first to tackle the sand. The KTM rider didn’t manage a great result today crossing the finish line 7th with 6 minutes and 1 second behind the leader J Barreda Bort.

The second finisher in the inaugural stage of 2018 Dakar, Yamaha rider Adrien van Beveren showed a lot of confidence in the Sunday’s race. He was in a great shape managing to lead over the first 100km with Pablo Quintanilla 28 seconds back and Kevin Benavides a further 14 seconds behind him. Van Beveren might be the big surprise of this year’s Dakar. If he manages to keep the pace he might take the second position on the podium.

"I finished second, not bad. I started fast, but after a few kilometres, I realised I'd better watch out for the high steps and avoid falling. I decided to take it easy and, I'm happy to finish second without pushing too hard, it's rather good! I was surprised by the wind, which broke up the dunes and made them even trickier. You mustn't jump on a bike, you can get hurt badly. I joked to Sam that I won't be taking him to train with me on the sand any more. This morning I told my little sister that Sam would be my main rival in this stage.”

The official KTM rider Walkner pulled a third place in the stage with over four minutes behind Joan Barreda. He crossed the finish line a few seconds before Kevin Benavides, Pablo Quintanilla and Sam Sunderland.

Ranking after the second day: