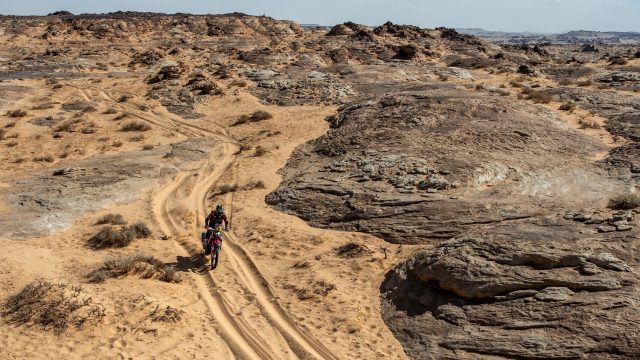 Stage six of the 2020 Dakar Rally had a special of 478 km. It was a full off-road day with a track all covered in sand. Ricky Brabec (Honda) clinched the win from his teammate Joan Barreda by just 01m34s. Toby Price (KTM) had some problems at the end of the special while Brabec increased his lead in the overall standings to 20m56s.

Today’s special was a duel between Toby Price (KTM) and Brabec on a special of 478 km. The road was all full of sand and to make things more challenging, the road books were received by the riders a few minutes before they started the stage.

Kevin Benavides (Honda) took the lead 107 km in the special with Brabec 27 seconds behind him while Jose Cornejo and Joan Barreda completed a 1-4 for Honda early in the rally.

Brabec moved in front after 213 km and never looked back. Benavides put pressure on his teammate to the last checkpoint where the two were separated by just 25 seconds with 53 km still to go. Bad luck struck and Benavides had to stop due to a mechanical problem on his Honda.

Between the misfortunate riders was Price as well. The rider stopped after 425 km into the stage and managed to finish the special on the 11th spot 16m33s behind Brabec.

Halfway in the 2020 Dakar Rally Brabec is leading in the overall standings by 20m56s from Pablo Quintanilla (Husqvarna) who finished stage six fourth behind Brabec, Joan Barreda (Honda) and KTM’s Matthias Walkner.

The rostrum overall is completed by Price while Cornejo and Barreda are fourth and fifth.

The riders in the 2020 Dakar Rally have a rest day tomorrow before heading to Wadi Al Dawasir on a 546 km special.