A hattrick from Honda as Brabec moves first overall

Stage three of the 2020 Dakar meant a strong performance from the Honda riders. The stage had Dakar’s highest point, at an altitude of 1,400 metres. Overall leader Sunderland and first stage winner Price lost a lot of time through the canyons and mountains as Brabec put his head down to win the stage.

The third stage of the 2020 Dakar Rally covered a total distance of 504 km. The scenery was through canyons and mountains. One challenge was the road itself, a circle around Neom, which was all covered with sand. Ricky Brabec (Honda) took advantage to win the stage crossing the finish line ten minutes in front of his team-mate Jose Ignacio Cornejo. Day three of the 2020 Dakar was a good day for Honda as Joan Barreda finished third making a hattrick for the Japanese manufacturer. With this result, Brabec moved on top in the overall standings. The stage was a tough task for the riders and put their navigation skills to the test. The winner on stage two, Ross Branch (KTM) crashed 90 km in the stage, injured his shoulder and lost 49 minutes to the leader Brabec after passing the 200-kilometre mark. The rider finished 40th 01h27m52s behind Brabec.

Pablo Quintanilla (Husqvarna) and Sam Sunderland (KTM) were also between the riders who lost a lot of time riding through the sand of Neom finishing the stage three seventh and 16th. 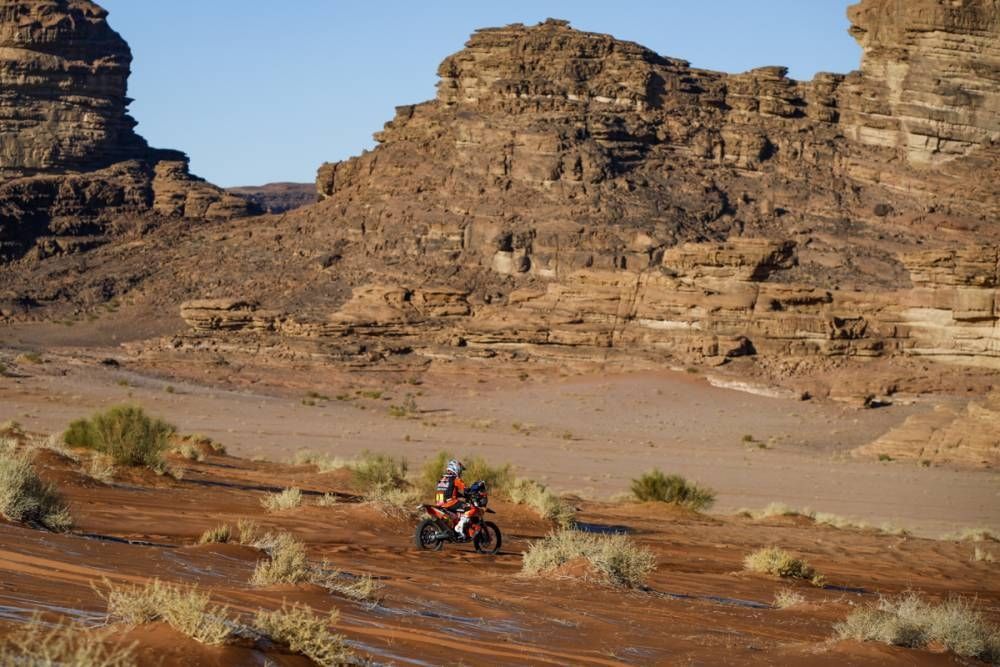 “It was a really difficult stage today. On the first part, I caught up with the guy who won yesterday, Branch I think is his name. He crashed and I stayed with him until he had recovered a little bit – he’d had a big crash. Then it was good until the second refuelling and the navigation was really tricky, plus I started to lose oil from the fork, from the front brake. It was kind of difficult to ride like this. On the last part, there was one way-point that was not in the place it should have been. We were searching for a few minutes with other guys and finally we decided to carry on. It was the hardest stage for everybody and we will see what will happen,” said Quintanilla. Navigation was an issue for first stage winner Toby Price too who found himself 900 metres off the right track and managed to finish the day on the 12th spot.