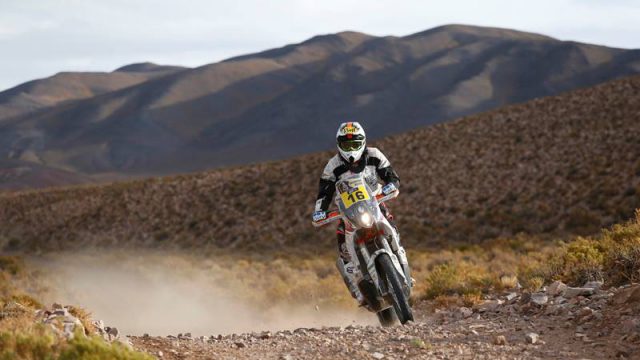 Ivan Jakes was hit by lighting during the rally’s third stage, near San Salvador de Jujuy, Argentina –  Salar Centenario Area. It happened during a heavy storm 300 km before the finish line, according to a motorsport.com report.

The Slovakian felt the hit which caused a strong pain in his left arm but continued riding and finished 15th. Doctors said that the bike saved his life, as it conducted the electricity through the rider and into the ground. After the finish, he went to the hospital and managed to participate on the fourth stage.

“Ivan Jakes is on track. In the evening he felt really bad, had headaches, he was sick, couldn’t drink water. He went to sleep late at night, slept around three hours and he felt bad again in the morning”, according to Ivan Jakes Fan Club Facebook page.

The fourth stage continues at around 3,500 meters and they will stay at his “cruising altitude” for the next six days. This stage will mark the entrance to Bolivia.

It was a very hard stage for the riders as temperatures ranged from hot to freezing at 4,000 meters.

Juan Barreda (Honda) took the Dakar lead after the third stage. He is followed by Sunderland (KTM) and Renet (Husqvarna). Toby Price, one of the favorites has a 21 minutes delay and holds the 9th place. The day before he was the leader but after a costly mistake during the first waypoint of the third stage he lost the pace.