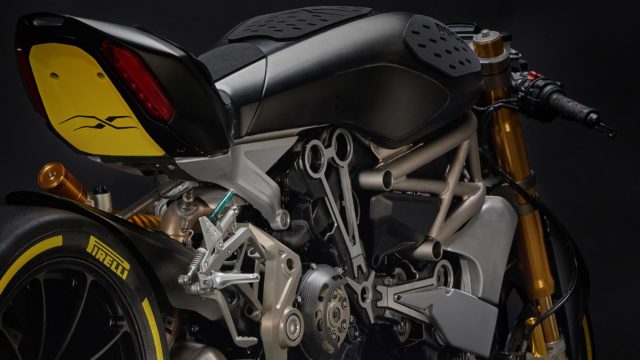 Ducati revealed draXter Concept at Verona Motor Show. The name says it all: it’s an xDiavel turned into a dragster racing bike.

Ducati draXter concept is derived from Ducati’s new cruiser motorcycle – xDiavel. The brakes and suspensions come from Panigale Superbike while the Termingnoni exhaust must sound spectacular. Of course, this bike will never see the asphalt: you just have to look at those footpegs to realize that. But the purpose was not to delight you with its racing performances. It’s all about the looks and the heritage. Those yellow stripes are a racing homage while the 90 number symbolizes the years since Ducati was born.

Through this concept Ducati draws our attention again to its xDiavel cruiser, revealed last fall at EICMA – Milan. The bike is aimed especially at the American market, ruled by Harley-Davidson. With its Italian unique styling, high-performance Testastretta V-Twin and belt drive, Ducati wants to take a bite from the huge American Pie.

Alongside the draXter concept, Ducati revealed at Verona two Scrambler-derived concepts, but none of them are as spectacular as the draXter.