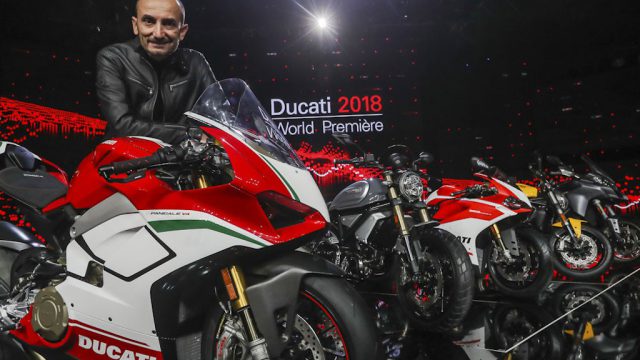 The Audi Group brand, Ducati, presented recently in a press conference the sales figures for 2017. The company experienced an overall growth compared to 2016, and things are looking promising for 2018. With the latest releases, the Panigale V4 and Scrambler 1100, the sales should point up for this year too.

The American market deliveries increased by 1.3% with sales totalling 8.898 units for 2017. The European market also increased by 4% with the Spanish market showing great interest for the Bologna manufactured motorcycles were the sales were up by 28.3%.

This strong performance confirms the soundness of the product development strategy undertaken in recent years”, stated Claudio Domenicali, CEO of Ducati Motor Holding. “In 2017 we laid the foundations for further, future development of the company. We launched seven new models on the market. Furthermore, we presented the Panigale V4, the first Ducati factory bike to mount a 4-cylinder engine, the outcome of the biggest investment Ducati has ever channelled into a single product. 2017 also saw further development of the Scrambler range. At EICMA the Scrambler brand presented the first completely new bike since its founding: the Scrambler 1100, which adds an all-new dimension to the Ducati Scrambler world by injecting big-bike technology, performance and ultra-high quality finishing.