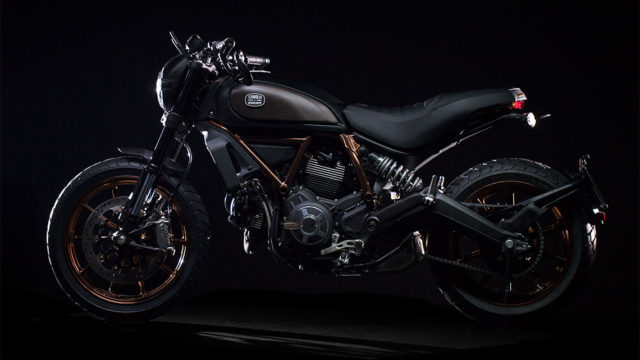 Italia Independent is not a political party, but a Ducati Scrambler special edition with a high end fashion touch.

These days Ducati revealed the hottest Scrambler in its lineup.

It is named after a world famous eyewear brand. Assuming you’re not too much into the fashion market, Italia Independent is a brand created by Lapo Elkan, the Gianni Agnelli’s grandson (Agnelli was Fiat’s CEO and shareholder). Elkan was also a member of the marketing department for Ferrari and Maserati, and in 2003 became the marketing director of Fiat. So there’s a kind of “motoring” connection between Lapo Elkan and the world of wheeled machines.

The Italia Independent edition will be produced in 1,077 units only. So, besides the limited edition number, what’s so special with this Ducati?

It has a cafe-racer style, due to its low “drag race” handlebar, wind deflector and down-the-handlebar rearview mirrors. Moreover, the Termignoni exhaust improves the special sound note of the L-Twin, while the color scheme is a black-cooper mix.

Oh, and there are some special edition sunglasses “attached” to the bikes. We don’t have the price tag yet, but it won’t be as cheap as the normal Scrambler. And we also don’t know if the Italia Design sunglasses are included in the package or are just an option.