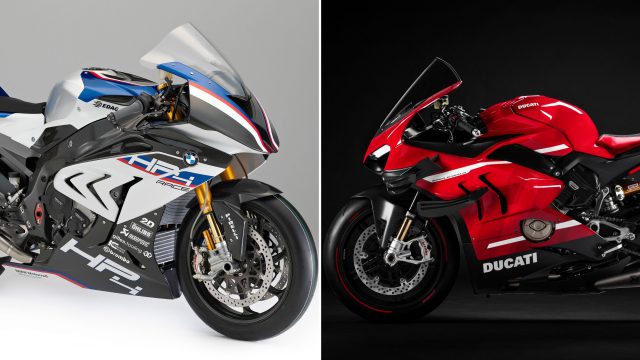 The Superleggera V4 has a 234 hp engine and comes with winglets designed from the 2016 Ducati MotoGP bike. The HP4 Race weights 146 kg which makes is lighter than a WorldSBK bike

Ducati offers a superior engine power and aerodynamic features with winglets inspired by the MotoGP bike. On the other hand, BMW comes with a dry weight that it’s lighter than a WorldSBK bike. Which one is your favourite superbike?

The Ducati Superleggera V4 is a 234 hp and 152 kg street-legal superbike with aerodynamic features developed from the 2016 Ducati MotoGP bike.

Its rival comes from Germany in the form of the BMW HP4 Race launched in 2017. It has 215 hp, weights 146 kg and like the Italian superbike, it has features like a carbon fibre frame, carbon wheels and a carbon fibre bodywork which makes the bike lighter than the factory World Superbike Championship bikes. The motorcycle was designed only for track use.

The BMW HP4 Race features a 999cc in-line four-cylinder engine putting out 215 hp @ 13,900 rpm and 120 Nm of torque @ 10,000 rpm. The engine is fitted with a double overhead camshaft and valve activation via individual rocker arms.

The German’s superbike entire engine needs to be replaced every 5,000 km which means that it can work for around 12 track days.

The bodywork & aerodynamics – carbon fibre for the frame, wheels, swingarm, fairings on the Superleggera V4

The Superleggera V4 has a full carbon fibre frame, wheels, single-sided swingarm and fairings. The aerodynamic features include winglets designed from the 2016 Ducati MotoGP bike which create a downforce of 50 kg at 270 kph.

The HP4 Race comes also with a carbon fibre frame, carbon wheels, carbon fairings and no rear frame. The frame has a monocoque construction and weighs only 7.8 kg. The aluminium alloy underslung double-sided swingarm is made of milled and sheet metal parts. The German engineers didn’t fit the superbike with winglets.

On the rear, the Superleggera V4 is fitted with a fully adjustable Öhlins TTX36 monoshock with GP-derived valves and a titanium spring.

On the other hand, the BMW HP4 Race is equipped with an Öhlins FGR 300 Superbike World Cup fork with adjustable rebound and compression damping, adjustable spring preload and an adjustable Öhlins SD052 steering damper.

The rear is fitted with a 220 mm Brembo Racing single disc with a four-piston Superbike World Cup fixed calliper with titanium pistons.

The Ducati Superleggera V4 has three reprogrammed Riding Modes (Race A, Race B and Sport) and five additional Riding Modes that can be personalised with the rider's preferred settings.

The BMW HP4 Race comes with four riding modes (Wet, Intermediate, Dry1 and Dry2), Shift Assist Pro for up and down gear shifting, adjustable Dynamic Traction Control system with five levels programmable for each gear and the Engine Brake is also adjustable for each gear. There are 15 levels of adjustment for the Traction Control and Engine Brake System.

All that carbon fibre, titanium, aluminium and magnesium components took the Superleggera V4’s dry weight down to 152.2 kg equipped with the racing kit and the Akrapovič full race exhaust system. The standard dry weight sits at 159 kg.

The HP4 Race is even slimmer with a dry weight of 146 kg thanks to the carbon fibre parts used. This means that the German superbike is lighter than the factory World Superbike Championship bikes.