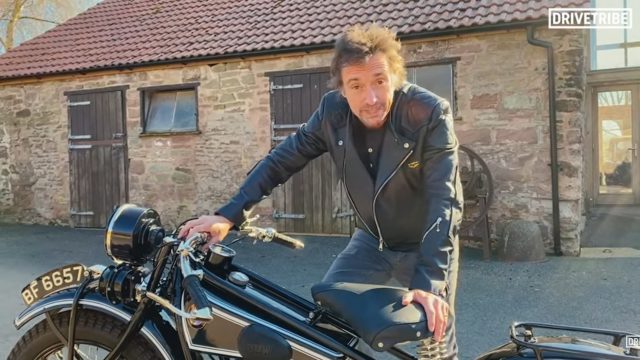 Hammond decided to pay a Long Way Round tribute to Ewan McGregor and Charley Boorman’s world tour. Instead of riding his bike around the world, the former Top Gear star decided, due to the lockdown, to ride around his garden on a 1929 BMW R52.

You may know the original Top Gear trio – Jeremy Clarkson, Richard Hammond and James May. They left the show and started the DriveTribe website and a YouTube channel to continue and share their car knowledge. We know that Hammond has a passion for bikes and it seems that he can’t stay away from his motorcycles. Thus, he rides a ‘29 BMW R52 vintage motorcycle, the bike that inspired McGregor and Boorman to start Long Way Round, through his backyard.

Along his trip, he comes across a 1969 Porsche 911T and a late 1920s Sunbeam, also he has some issues with starting the bike due to the engine’s Kickstarter, typically Hammond. The BMW R52 features a 486cc boxer engine making 12hp. It has a three-speed transmission, single-plate dry clutch, plate spring fork and rigid rear suspension.150mm drum front brakes and block brakes on the rear. Wet weight sites at 152 kg.