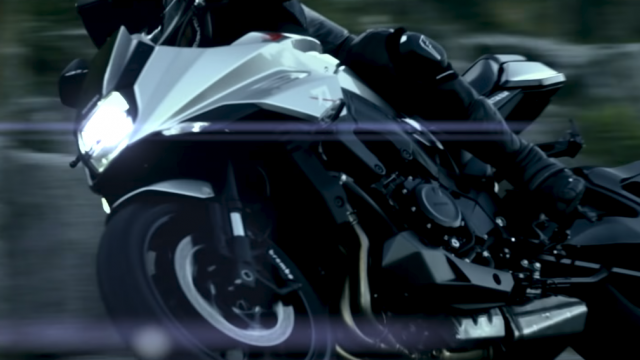 Praised be the two-wheeled gods, Suzuki’s cold heart began to melt and we get a brief glimpse of the all-new Suzuki Katana in the new teaser revealed recently. As expected, the Katana resembles quite a lot to the concept the Italian magazine Motociclismo showed earlier this year, and this includes the retro-inspired square headlight.

The teaser shows the bike only for a couple of seconds or so, and Suzuki was careful enough to add some cinematic blur, instead of offering us a crystal-clear, full HD experience. If no other high quality photos leak these days, it’s on October 2nd at the Intermot where we get to see the new Katana in all its splendor.

From what we managed to see in this new teaser, the Suzuki Katana is a bike with a neat, edgy design, and firm, bold lines that sort of hark back to the old days when manufacturers started to follow the more rugged, rougher path. It’s impossible to determine what engine Suzuki used for Katana, but, at least, it’s all-black and we’re suckers for darkened machines.

If we were to judge the size of the lump, we’d place our bets on a 750cc platform, but that’s only our guess. Watching the teaser over and over and realizing that Suzuki only shows us the left flank of the bike gave birth to an interesting, maybe just a far-fetched supposition. Could the right flank hide a turbo? That is, has Suzuki finally put a bike based on the Recursion concept on the road? Cometh ye, Tuesday!