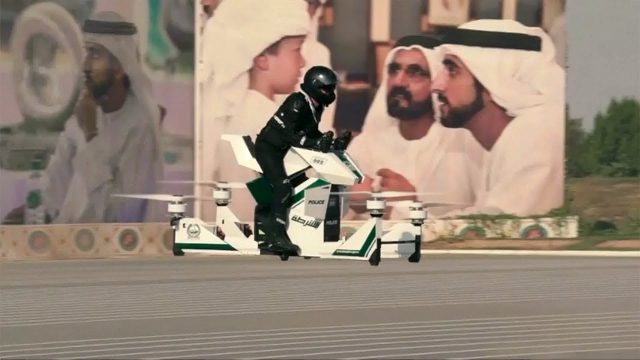 Forget about the Lamborghinis. Meet the Hoversurf

The Police department in Dubai is well known for their extravagant patrol cars, starting with names like Lamborghini and Ferrari to Bugatti and American muscle cars. The latest acquisition that will join the force is a half-motorcycle half-drone vehicle called Hoversurf. It's an aircraft that has the ability to vertical take-off and land (VTOL).

The machine was unveiled at the Dubai Gitex Technology show. Its called Scorpion and the builder Hoversurf is a Russian company that develops this kind of vehicles. The company CEO Alexander Atamanov signed and agreement with the Dubai Police, and his company was invited to start mass producing the vehicle in the Dubai area.

The Scorpion uses four propellers to get airborne just like a drone. The rider seats in the middlet like on a motorcycle. The maximum speed is around 40mph, and it can stay in the air up to 25 minutes. The maximum load is 600 lbs, and the controls are also similar to a motorcycle.

Next time you are in Dubai check the sky for airborne police officers. You can watch a demo of the vehicle in action below.