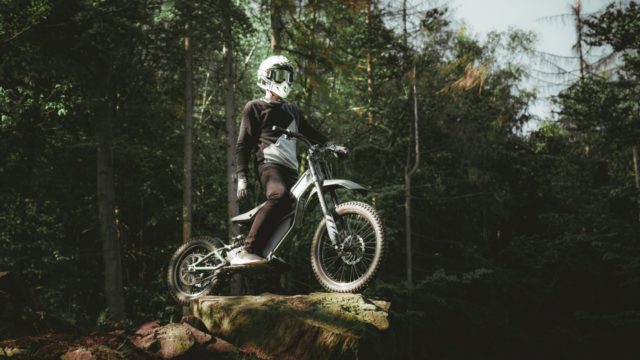 This is the new Kuberg Ranger which we could say it’s an electric dirt motorcycle, but it looks more like a mixture between a bike and a scooter. It’s powered by a 14,000-watt electric powertrain and packed with a airlift seat, roomy footboards, mixed-size tires, and offroad suspension. Interestingly, it looks practical and you can sit or stand upright on it and even tow up a 66 lb loaded trailer.

Kuberg is a brand based in the Czech Republic who builds lightweight electric dirt bikes and minibikes for kids and young customers. Besides their electric motorcycle range like the Freerider, Kuberg launched the Ranger model which the company claims it’s a different kind of electric motorcycle, somewhere between a dirt bike and an electric scooter. We have to say it looks apart from other dirt focused electric motorcycles.

Kuberg Ranger features a stand-up riding position thanks to the low mounted seat. It’s also very light thanks to the 110 lb (50kg) frame which is fitted as low as possible to drop the electric motorcycle center of gravity. Moreover, the engineers had a different view of how the tubular steel frame should look like so they changed the angle so it’s positioned downward rather than pulling it rearward. This helps the electric motorcycle to enhance its handling abilities and makes it more stable when the rider tackles any type of offroad terrain.

The powertrain features a mid-mounted 14,000-watt electric motor packed with a 24 Ah 48V lithium-ion battery pack which sits in the lower section of the tubular frame. All this is good enough to help the Kuberg Ranger reach a top speed of 50 mph (80 kph) and allows the electric motorcycle to reach 19 miles (30 km) at full throttle. Furthermore, the top speed is set at 50 mph (80kph) while the electric motorcycle range is up to 120 miles (192 km) with double battery. The electric motorcycle comes equipped with different riding modes – A, B and an Eco mode which provides up to 60 miles (97 km) of range. Moreover, Kuberg offers a 48-Ah battery option to double that range.

It’s quite a versatile electric motorcycle and it also features a customizable trailer which can carry tools, camping gear or other things the rider could need up in the wild. It can tow up a trailer weight of 66 lb (30 kg).

Suspension wise the Kuberg Ranger has a Manitou Dorado Expert 180mm fork and DNM Burner RCP-3 rear shock to ensure offroad capabilities. Comfort is provided by a pneumatic seat mounted very low over the top of the down tubes and can pop up at the push of a button fitted on the handlebars.

Looking at the tires, Kuberg Ranger is fitted with trail tires -19 x 2.75-inch on the front and 14 x 3-inch on the rear while the wheelbase stands at 50.4-inches (128-cm). Of course, the electric motorcycle needs some stopping power, thus it’s equipped with Tektro Orion four-piston disc brakes and a cool push-button regenerative braking system which helps the battery recharge while braking.

Thanks to a partnership with Indiegogo, Kuberg can begin production for the Ranger model at a price tag of $4,545 for the 14kW (19 hp) race version we see in the photos. The adventure version costs $4,995 (trailer included). Both versions are limited editions of just 50 units and come with a 39% or 40% off on the price while deliveries are set for November 2020 with shipments available worldwide. Of course, there’s a Standard version delivering 8kW (11 hp) which will set you off $3,998 (34% off the original price tag) and this version is available as a limited edition as well of just five units. The double battery option can be added separately for $999 (53% off), it’s limited to just 50 units and delivery is set for October this year.