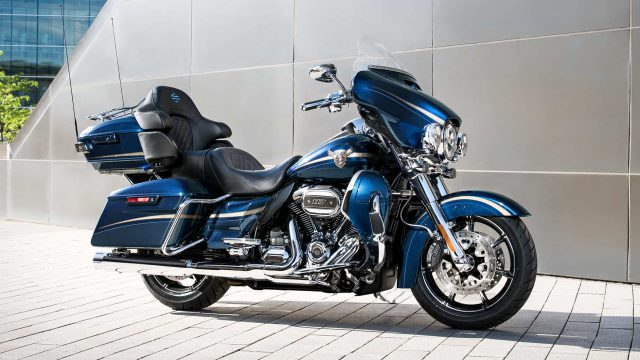 For 2018, Harley-Davidson Custom Vehicle Operations department prepared three new limited edition tourers. The CVO Limited, CVO Street Glide and CVO Road Glide will be the biggest and most powerful Harleys on the market.

All three models will be fitted with the Screamin Eagle V2 engine. The 117 powerplant is Harley’s largest ever stock engine. The 1923cc Milwaukee-Eight 117 combustion chamber produces 166 Nm of torque and features colour accented rocker box lowers with a deep orange finish. More than enough to move the over 380kg behemoths.

Harley did their best to achieve a high-quality finish for their 115th Anniversary models.

“For CVO, we’ve rebooted the styling tone of the overall lineup and added some exclusive performance enhancements. And our two new custom baggers are the most aggressive, on-trend Touring bikes in the market. I can’t wait for riders to throw a leg over and experience the new rides for themselves.”

These three bikes are the pinnacle of the custom touring look taken to the edge. They also feature enhanced comfort for rider and passenger and a state of the art infotainment system called Boom! Box. Harley-Davidson says the stereo system delivers a powerful and pure sound, and now it can be paired via Bluetooth to the rider and passenger headset.

Unfortunately, the CVO models come in limited numbers, but they are available for order at Harley dealers. If you want your great American Tourer to wear the 115th Anniversary badges on it, you should hurry up.