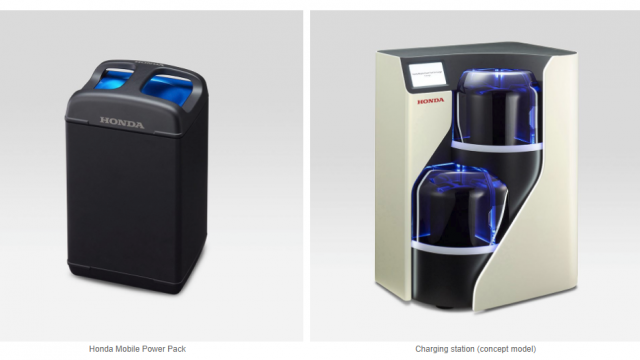 Things are moving fast in the electric mobility segment, and it looks like battery sharing might become one of the main things in the future. Honda and Panasonic are only the latest companies that join efforts in trying to establish some sort of standard in the industry. Their most recent endeavor is an experiment that will start in December 2018 in the world’s third biggest motorcycle market, Indonesia.

At the center of this experiment lies the Honda Mobile Power Pack, a battery pack that’s easy to take out of its slot in an electric vehicle and swap with a fresh one. The idea isn’t new, obviously. After Gogoro successfully implemented their smart charging stations, Kymco also jumped in the “EV standard” bandwagon with their iONEX proposal.

A conclusion is yet far from us, as it would most likely take several years until all manufacturers agree on what could become a universal standard for swappable batteries. At the same time, a lot of electric motorcycle makers prefer to stick to their own built-in batteries, hoping that the charger station network around the world will soon become big enough to make longer rides significantly easier. And of course, betting on faster-charging batteries, too.

Still, from a range and recharging time standpoint, it’s extremely convenient and appealing to spend 1 minute replacing depleted batteries with fresh ones and get back to riding. In fact, we guess this is exactly what Honda is trying to capitalize, no longer needing to make hour-long stops to recharge, just simply swapping out a dead Mobile Power Pack with a full one and ride.

With the financial power Honda and Panasonic have, plus their solid expertise in the field, we might just get to see their experiment turning into a new lucrative direction for the EV industry.