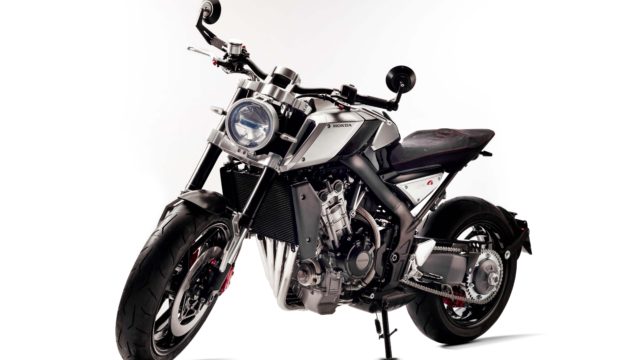 It’s too bad that CBSix50 and CB4 were presented just as some design concepts. They look so nice, that Honda should immediately put them in the production line.

The CBSix50 is a kind of “urban-scrambler”, fitted both with off-road tires and racing-type exhaust. The Scrambler elements consist of those tires, the spoked wheels, the handlebar, and maybe the seats. All the other elements are purely-street. Just look at that inline-four 650 engine and at the racing-shaped exhaust and you’ll see that this type of bike will never see the off-road trails. But who cares? With that headlight and urban-scrambler shape, it should rock on any street.

Seen from behind, the CB4 model looks Italian: just like an MV Agusta. That type of exhaust is not so “Honda”, but it looks very fine. Too bad that Honda doesn’t actually use it on its range. As for the headlight, it looks similar to Husqvarna’s 701 and 401 concept.

Honda didn’t suggest that those two projects could see the production line in the next years. But it should be a must, considering the fact that Honda doesn’t have yet models in the Retro/Cafe Racer/Scrambler range. The only one available is the not so successful CB 1001, but there is no representative in the middle-class bikes. Moreover, two models such as CBSix50 and CB4 could spice-up Honda’s line-up.