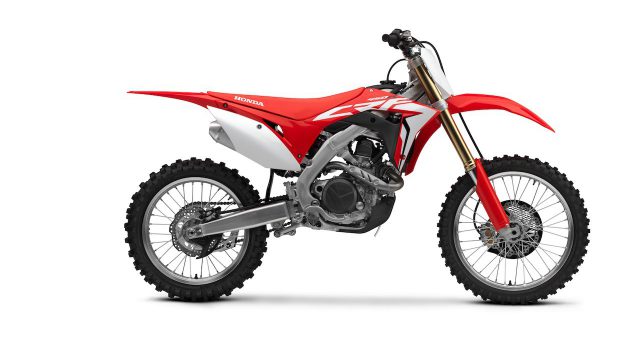 The moto-crosser gets an electric starter instead of a kickstarter

Honda CRF450R gets an electric starter and a lithium-ion battery instead of the old-school kickstarter. Honda says that it’s an invaluable aid both for convenience and for saving precious lap time after mid-race mishaps.

Besides the main update, the front and rear suspension settings have also been fine-tuned for even more agile handling.

For the first time, the CRF450R will be equipped with electric starter as standard, an invaluable aid both for convenience and for saving precious lap time after mid-race mishaps. The electric starter is powered by an ultra lightweight lithium ion battery, and the removal of the kickstart lever saves all-important weight. Front and rear suspension settings have been fine-tuned for even more agile handling.

These changes build on the rock solid base of the 2017 version of the CRF450R, which was the first ‘from the ground up’ redesign of the CRF450R for eight years, with new chassis geometry, low centre of gravity and race-ready 49mm Showa steel spring front fork; under the development theme of ‘Absolute Holeshot’, HRC-derived knowhow added 11% more top-end power – and more torque throughout the rev range – on the all-new 2017 model.

New to the Honda line-up in was the CRF450RX race-ready enduro machine the CRF450RX, featuring enduro-spec suspension, PGM-FI and EMSB (Engine Mode Select Button) mapping, 8.5 litre fuel tank, 18in rear wheel, electric starter and sidestand. For 2017, a switch to a lithium ion battery for the electric starter saves 600 grammes of valuable weight high up on the machine.

Both the new CRF450R and CRF450RX will be in dealerships across Europe in the summer 2017.