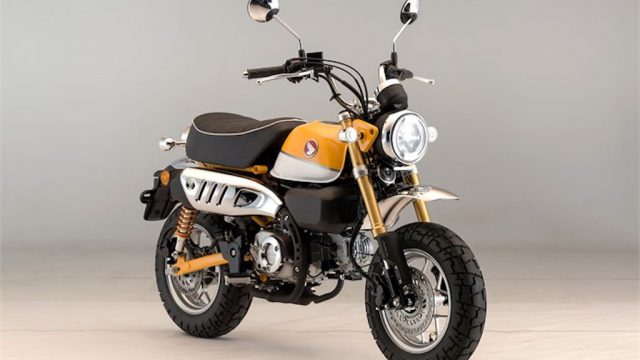 Your childhood dream-bike gets state of the art updates

The famous Honda Monkey moved from the 1970’s mini-bike to a modern machine that now wears a new styling and premium features: USD fork, LCD instruments, IMU- based ABS and Full-Led lighting. Although the dimensions and engine are pretty much the same, the new Monkey might become popular again.

This bike started as a fun machine for an amusement park, but the instant success made it become a production bike that is well known in America and Europe. The first appearance was in the 1960’s, and since then the Monkey constantly evolved from 50cc to 125cc, from 3-speed gearbox to 4-speed and from the carburettor to a fancy PGM FI injection system.

The Monkey was easy to ride, lightweight and it comes with unmistakable looks. Back in the day, the Honda Monkey was designed as an ultra-light RV (recreational vehicle) that would fit in the trunk of a car with the help of a folding handlebar, and later a quick detach front fork.

The revamped Honda Monkey is more likely a town bike that will keep a fellow traffic free. The new styling will remind you of the first models with small chromed parts here and there. The frame shares the same paint with the tank, while the chromed steel mudguards and the exhaust shield are fitted as a homage to the original theme.

The modern touch comes from the LCD dash that shows the fuel level and lights up every time you turn the key. All the lights are now LED, and there’s also an “answer back” system that will make the lights blink at a touch of a button when you don’t find your "Monkey" in a crowded car park.

The engine is the original Honda Monkey horizontal SOHC 125-single cylinder that produces around 9HP. The gearbox has 4-speeds that help a lot with the fuel consumption: an incredible 67km/l (60miles with 1/4 of a gallon).The suspension system is also improved. The front fork is now up-side-down with a gold finish, and to fit the theme the two rear shock share the same finish.

The new Honda Monkey can be everybody's much-wanted fun bike. This classic reborn might grow again between the youngsters, but the price will be the turning point in the Monkey's future.

How about cars built by motorcycle manufacturers?