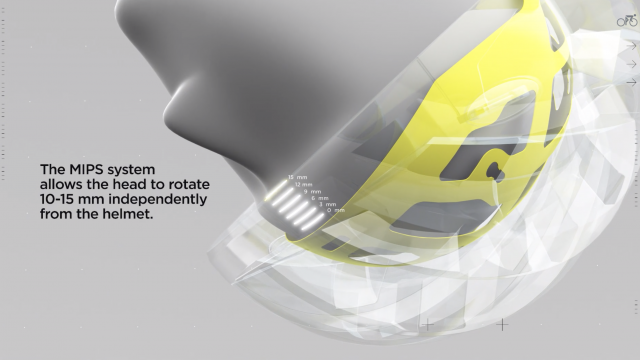 There are very good helmets and there are MIPS-enhanced helmets, which can significantly reduce the shock your brain has to deal with during a motorcycle crash.

MIPS stands for Multi-directional Impact Protection System, a new type of head protection created by a group of Swedish safety engineers, and which can be implemented in pretty much any helmet model.

Studies showed that in most of the crashes, a rider’s head does not hit an obstacle vertically in relation to the helmet. The majority of cases when a rider comes off the motorcycle (horse, bicycle, skateboard and so on), their heads hit the ground or other obstacles at an angle, thus creating a rotational force that’s being transmitted to the head and brain. Statistically, the angled impact is a far more realistic scenario in case of a crash than a vertical one.

Now, this rotational force can cause significant damage to the brain tissue, possibly leading to severe injuries, so the engineers and doctors behind the MIPS came up with a solution to dissipate the shock energy.

The principle is quite simple. MIPS-equipped helmets have a mobile structure that rotates inside the helmet, allowing a rotation of 10-15 mm. It resides between the comfort padding and the EPS impact absorption layer, while remaining practically invisible and unnoticeable during rides.

There is no activation time for MIPS, as it starts moving when the very impact occurs. Movement time was measured and the results yielded 5 to 10 ms. If anything, you should consider that the time you need to blink is around 100 ms, so we can indeed talk about instantaneous reaction. As the MIPS structure rotates against the outer helmet shell, it absorbs a lot of impact energy, reducing its transfer to the head, and ultimately, the brain.

MIPS is not the only system which reduces rotational impact forces, but it looks like it’s the first that was adopted on a larger scale in the moto industry. MIPS’ theoretical foundations were laid back in 1995, followed by an initial patent three years later. The first implementation occurred in 2007, with the EQ1 equestrian helmet.

The MIPS BPS (Brain Protection System) made its way to road going motorcycle helmets in 2016. Currently, the MIPS yellow dot is present with 48 helmet manufacturers that deliver an impressive range of 212 models, with the list growing longer each day.

Visit MIPS website for more info before you get your new helmet this year.