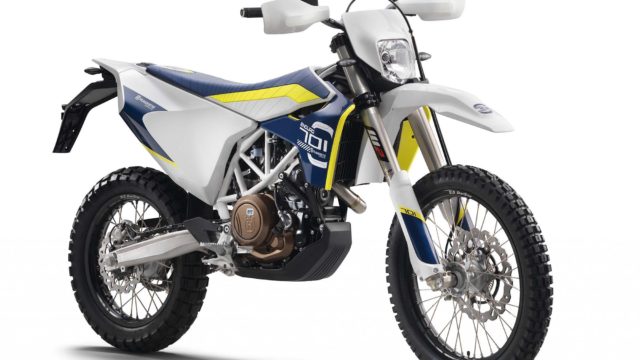 Here is the new Husqvarna 701 enduro, unveiled at 2016 EICMA. The 690 cc single might be common, but otherwise, the new Husqy has a different approach to enduro world.

Husqvarna is back in business. The off-road segment has now an extra option. If you would say, it’s just a large displacement motorcycle which is made on the KTM 690 platform you would be right. The new era, as the Husky’s calls it, represents the expanding of their model line. The aim is for user-friendly and comfortable bikes bringing them close to the street area.

A major reshape in the bodywork zone

It’s narrower, lighter (145 kg), with the regular dirt bike look we are used to. The great ingenuity is the gas tank, moved in the back of the motorcycle, which replaces the rear frame. The headlight shape gives the 701 a sharp look as it comes forward from the fairing.

The 701’s propulsion unit is a single cylinder KTM 690 cc liquid cooled, single cam, four valve engine that gives at its best 67 hp. Ride-by-wire technology used on this bike is a first for Husqvarna. Power output is more predictable, as the mapping it’s changed and split in three modes to increase the rider’s comfort. The Slippery clutch that comes with this model combined with the low weight and responsive engine makes the recipe of a competitive machine.

A fully adjustable suspension from WP is mounted to keep the bike on the road. The wheels are regular 21-inch front and 18-inch rear. Brembo gets the job to stop the bike. It has a four piston caliper for front and a single piston on the rear, combined with wave brake disk. The ABS system can be switched completely off or kept on only for the front wheel.

For a bike built on the same platform as the KTM, we expect a fun to ride and friendly bike. Overall, Husqvarna engineers made some innovative changes to keep this 701 different from the competition: Backwards mounted gas tank, Ride-by-wire Technology, and Slippery clutch. A front-fuel tank is available as an option for long-range use. Husqvarna 701 will hit the dealer floor the spring of 2016.