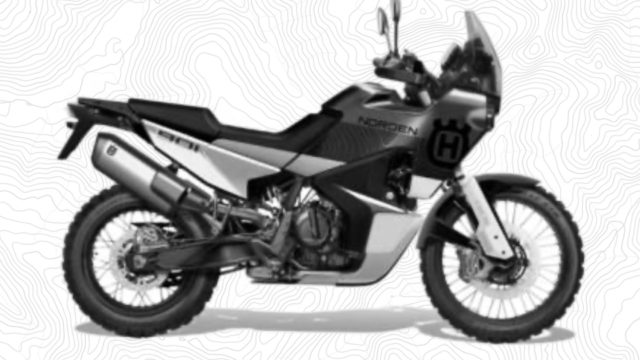 A photo of the production version of the Husqvarna Norden 901 has been leaked. The motorcycle keeps a bunch of components from the concept model, but the photo reveals that the adventure motorcycle was fitted with homologation requirements like an Euro5 compliant engine.

The first time Husqvarna presented the Norden 901 Concept was last year at EICMA when the company showcased an 889.5cc engined adventure bike based on the KTM 790 Adventure. Now, a leaked production version photo of the Husqvarna Norden 901 appeared and we have a chance to take a glimpse of how the motorcycle will look like once it’s launched.

Husqvarna Norden 901 is based around the 889.5cc parallel-twin engine from KTM but compared to the 790 Adventure model, the Norden 901 looks more designed for road use (most likely long-distance travelling) rather than being manufactured for offroad tracks. The motorcycle kept a lot of parts fitted on the concept model like the fairing design, headlights and fog lights, but looking at the blurry photo, the Husqvarna Norden 901 is equipped with an exhaust system telling us the 889.5cc parallel-twin is Euro5 compliant giving a clue that we could see the bike presented as a 2021 model.

The 889.5cc parallel-twin engine is derived from the KTM 790 Adventure model and it’s already fitted on the 890 Duke R. Thus, we could expect the same power figures – 125 hp and 99 Nm of torque, but we have to wait and see if the engine was tweaked to deliver more low and mid-range torque. Also, the spoke wheels have been kept as well as the mudguard. The braking system is fitted with radial callipers while the swingarm looks similar to the one on the 790 Adventure.

We’ll have to wait and see what other components remained from the concept bike and made their way to the production version when the Husqvarna Norden 900 will ve officially launched. And of course, we’re curious to see the price tag for this adventure motorcycle.