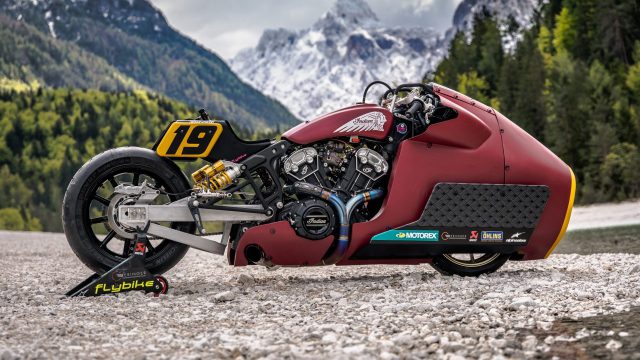 A motorcycle fitted with a Nitrous engine racing on ice. We want to see this race

The Indian Appaloosa v2.0 will make its comeback to racing. This time in Siberia, on ice and at -20°C. The motorcycle features an engine with a Nitrous Express setup and tyres fitted with studs.

According to MoreBikes, the Indian Appaloosa v2.0 is returning to racing. Indian Motorcycle and Workhorse Speed Shop announced that the motorcycle is going to race at the 2020 Baikal Mile – an event that takes place on the ice at Lake Baikal, Siberia.

“The feeling is crazy, it’s a bit like going racing on the moon. There’s no reference point, we go to a desert of ice in Siberia where it can be -40°C at night -20°C during the day. I’m super excited and a bit lost at the same time as we have no idea what to expect,” said Brice Hennebert, creator of Appaloosa.

“With just a few days before the flight, I’m focusing on the practical aspects, but I know this journey will be one of the most insane experiences of my life,” he added.

The Baikal Mile it’s a race that takes place on the ice off the eastern shore of Lake Baikal, Siberia. The race is held on ice tracks 1/8-mile and 1-mile long in extreme temperatures – -20°C day time & -40°C at night.

The Baikal Mile started in 2019 in March and the goal is to make it become an annual motorsport event.

The motorcycle is based on an Indian Scout bobber 1200 model. The previous model took 700 hours to design and build. It featured a 130 hp engine fitted with a racing ECU, Power Commander, direct intake, Nitrous Oxide Injection system and an Akrapovič exhaust.

The engine of the Appaloosa v2.0 was updated to match the extreme riding temperatures. So, to control and improve the engine cooling, the front fairing has been closed off with a new carbon fibre nose cap. Also, the motorcycle was fitted with smaller cooling intakes on the side fairings.

Other upgrades on the motorcycle include the NOS system that was replaced with a Nitrous Express setup and Öhlins steering damper.

To increase the grip level, the motorcycle is equipped with Dunlop SportSmart Mk3 tyres hand-fitted with hundreds of studs. This process was completed in four days.

The Indian Appaloosa v2.0 will make its racing return this year in Russia from February 27 to March 1. And we can’t wait to see it in action!