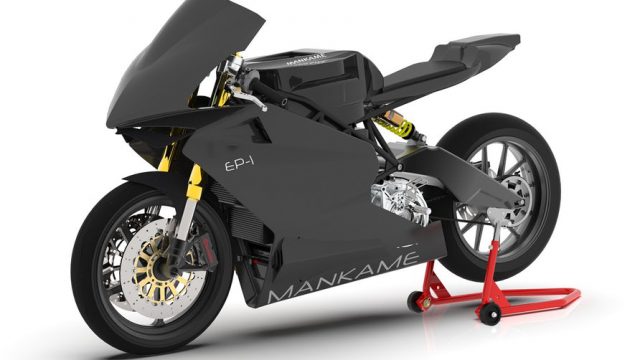 An Indian startup by the name of Mankame Automotive promises to deliver a new electric motorcycle dubbed EP1, with a claimed peak range of 500+ km (more than 310 miles). As if this claim wasn’t almost outrageous enough, Mankame adds that their EP1 e-bike can also do in excess of 250 km/h (155 mph) if needed. Interested already? Here’s more…

In its top trim, Mankane EP1 comes with an 18.4 kWh battery and a 54 hp motor reaching 8,000 rpm and producing 180 Nm of torque. The numbers sound a bit far-fetched, but Mankame says that everything has been tested down to minute details, and the superior aerodynamic coefficient allows the bike to be more efficient than what the competition can dream about.

With a steel trellis frame, the EP1 will be equipped with an USD Ohlins fork, while in the rear, customers will be able to choose between the standard Showa shock and the optional Ohlins TTX unit. Braking power comes from Brembo, with dual 320mm front rotors and a single 245mm rear one.

The battery pack weighs only 80 kg (176 lb) and has a liquid cooling system for the Samsung cells inside. However, it’s the proprietary controller that does all the magic, Mankame adds. This in-house software will be complemented by Mankame’s own ABS and traction control algorithms.

Now, you surely noticed that the photos seem a bit iffy. Mankame adds that they are CG renders that faithfully reproduce the digital model used for tests, and that the bike will look stunning in its commercial shape. Also, the makers admit they have only tested the specs and features of the bike in the computer-aided modeling realm, running tests that are 95% accurate, and they can justify each and every penny they’re asking for on IndieGogo.

Mankame will debut their official EP1 crowdfunding campaign on July 1st, with deliveries (if fully funded) scheduled for 2022. Hopefully, this will not become the second Skully AR-1 smart helmet story…