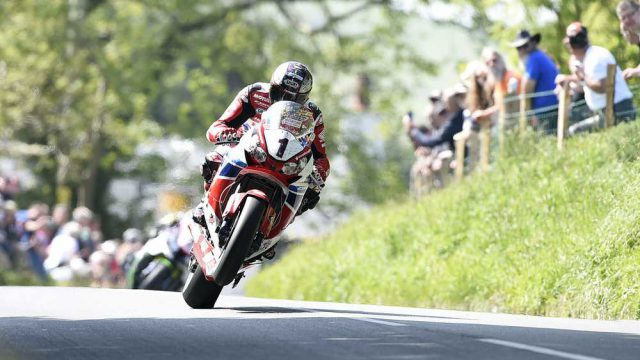 McGuinness on a Kawasaki for the 2020 Isle of Man TT

The 2020 Isle of Man TT and 2020 North West 200 will see the legendary rider racing on a Kawasaki ZX-10RR. McGuinness signed with Bournemouth Kawasaki and will race in the RST Superbike, RL360 Superstock and Senior TT Races at the Isle of Man.

IOM TT is one of the most dangerous road races you can find, so preparation is important.

Before the legendary race, McGuinness will also compete in the Superbike and Superstock races at the NW 200 event in May, two weeks ahead of the TT.

This is a first for the 23-time TT race winner on a Kawasaki at these events although he raced for Hawk Racing Kawasaki at the Ulster Grand Prix in 2004 finishing second.

“I’m delighted to announce my plans for the 2020 International road racing season and equally delighted to be riding for Quattro Plant Bournemouth Kawasaki," McGuinness said.

"Their record on the roads with James Hillier, in terms of both results and reliability, along with their reputation within the bike industry, speak for themselves and with it being such a family-orientated team, it’s the perfect fit for me. It’s a highly reputable, professional team who have achieved great things on both the roads and the circuits and, for me, they tick all the boxes,” he added.

We don’t know what to expect from the rider, but he has a lot of results at the TT with 23 wins and a record of 47 podiums plus six wins and 21 podiums at the North West 200. Taking this into count, it is likely to see McGuinness on the podium at this year's Tourist Trophy and NW200.

“Pete drove all the way up from Bournemouth to Morecambe to meet me and put the offer on the table and it didn’t take much for me to sign – it was an easy decision," said McGuinness.

"Everything made perfect sense and we’ve put together a good plan that will put us in the best position possible for the TT and North West 200. After my performances at Macau, I really got my mojo back and, with my leg now 100%, I feel like I’m as riding as well as ever. Joining Kawasaki and Pete’s team and riding the Ninja ZX-10RR is a new chapter for me, one I’m excited about and really looking forward to,” he concluded.

The last podiums at the TT for McGuinness were back in 2016 with a third finish both in the Superbike and Senior TT races. At that time he was riding the Honda CBR 1000 RR Fireblade. The rider had a crash in 2017 at the NW200 and his races on a Norton at the Isle of Man never brought any success.

Moving on to the new partnership with Kawasaki, McGuinness replaces James Hillier who left Bournemouth Kawasaki to join OMG Racing. His teammate is the NW200 record holder Alastair Seeley.

“We both know there’s a big job ahead of us to be ready for the new season but it’s one that we know will be great fun. Hopefully, we can put John McGuinness back on the podium at the Isle of Man TT, the place where we know he belongs,” he concluded.

All eyes on the 2020 Isle of Man Tourist Trophy. Good luck McGuinness!