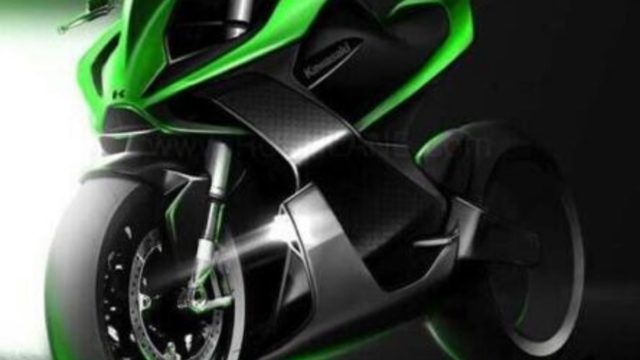 Kawasaki seems to be working on a new supercharged engine according to these patents from Cycle World and MotoIT. The company aims to increase fuel efficiency as well as reduce emissions. What’s interesting about this patent, besides the supercharger, is the two-stroke engine configuration.

It has direct fuel injection, poppet valves and a crossplane crankshaft like we’ve seen fitted on the Yamaha R1 and MT-10 supernaked. Moreover, the power unit is designed as a generator for hybrid motorcycles. We’ve seen two-stroke engines most commonly fitted on motocross bikes. But to develop an engine with a supercharger and a two-stroke working order needs to rethink the whole basics of how an engine works. And this seems to be what Kawasaki is doing, at least regarding these patents.

To start with, the engine aims to be fitted on a series production hybrid motorcycle. This means that the electric unit will power the wheels while the petrol engine will supply the energy needed for the power unit to work. Also, looking at these patents, Kawasaki is developing a high-performance engine to work constantly at a certain speed to offer efficiency and be eco friendly.

Furthermore, the two-stroke engine configuration is used in this design because it offers a clean-running order compared to any other engine configurations. Kawasaki tweaked the engine and replaced the ports in the cylinder walls with poppet valves like we find fitted on a four-stroke engine and added double overhead camshafts. Thus, only the cycle has changed from four-strokes to two-strokes.

The supercharger helps the two-stroke engine by increasing the pressure of the intake air to fill the cylinder and evacuate the spent gases from the previous cycle. So, both the exhaust and inlet valves are opened at the same time which helps the direct fuel injection work properly, and it doesn’t allow unburned fuel to escape into the exhaust system. By doing so, it increases fuel efficiency as well as provide fewer emissions.

Thanks to the two-stroke engine configuration, each cylinder has a combustion event for each 360-degree turn of the crank, rather than every 720 degrees like in the case of a four-stroke engine working order. To reduce engine vibrations and provide less stress on the engine, Kawasaki used a crossplane crank to have the combustion events spread evenly, meaning that one cylinder is firing for each 90 degrees the crankshaft turns. Moreover, the crankshaft is fitted with an electric generator at each end to supply power to a storage system which sends electricity to an electric drive motor connected to the rear wheel.

This supercharged two-stroke inline-four engine configuration could help convert between 60% and 70% of the energy contained from the fuel into propulsion. It may not seem much if we compare these figures to the ones an electric vehicle provides, which is 95%, but it looks like Kawasaki is on their way to develop future hybrid engines. We’ll have to wait and see when this technology will come to production motorcycles and it seems more and more that the future is electric.