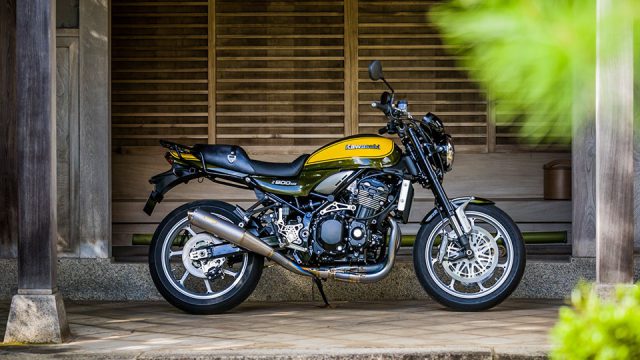 After an absence from the retro motorcycle scene, Kawasaki tries to catch up with the competition. It’s not just that they unveiled the new Z900RS, inspired by the 70s Z1 a month ago. The Japanese manufacturer also showcases some custom works based on the four-cylinder retro bike.

The custom builders that joined the party are Bito R&D, Doremi Collection and Moto Corse.

Bito-san, a master craftsman who knows the original Z1 series inside and out, built his Z900RS custom as if he was his own client. Adding his signature Magtan wheels, Bito-san also crafted many other parts – some easy to spot, others more subtle to create his vision of what a customer might create using the Z900RS as a base.

For Moto Corse the direction differed: chrome pin-striping to the fuel tank, quilted seat and numerous dry carbon replacement parts.  As the leading specialists in Japan for Italian machines, one would at first think their task to be the hardest. Not the case as Shin Kondo of Moto Corse not only owned a 1972 750 Mach IV H2 but admits to being seduced early on by the Japanese market Z2 version of the legendary Z1.

Doremi Collection were thinking more of racing functionally than elegance in creating their Z900RS. At a glance, their machine is a faithful reimagining of the famous Yoshimura Z1 raced by Wes Cooley in the AMA Superbike series. Complete with matt black four into four exhausts like the Cooley machine, Hiroshi Take of Doremi Collection added many clever Z1 references such as the DOHC “ignition points cover” and chrome Z1 style direction indicators.

Watch our Kawasaki ZR900RS video below