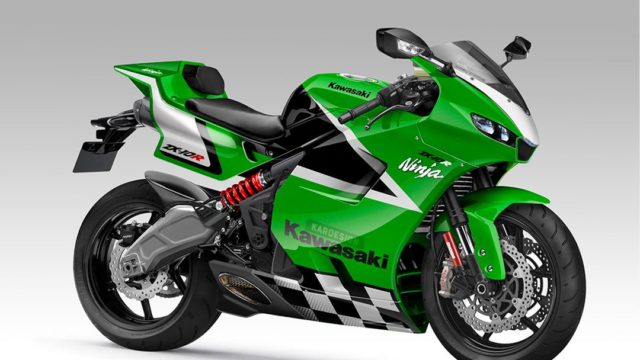 This design sketch is made by Kardesign and it’s a Kawasaki ZX-10R with a couple of tweaks and an old school paint scheme which reminds us of past ZX-6R/7R models. The design embraces an exhaust system inspired from MotoGP bikes, new fairings, headlights, tail unit, swingarm and monoshock to name a few.

The motorcycle you see in the picture is a bike sketch made by Kar Lee of Kardesign Koncepts who is a design artist and a motorcycle writer who likes to push boundaries forward when it comes to how a motorcycle should look like. This is the case for this Kawasaki ZX-10R which was redesigned and now looks like a mixture between a superbike with a couple of MotoGP parts all covered in an old school paint scheme. Lee's idea of this design project was "less angles, more curves" and by the looks of it, he seems to be right.

The Kawasaki ZX-10R features new sleek headlights with a new front air intake which makes the superbike look more aggressive. The fairings have different cuts compared to the current ZX-10RR model and at the bottom, they feature an exhaust system inspired by Valentino Rossi’s 2020 Yamaha YZR-M1 MotoGP bike. There’s a different tail unit design which has underneath it an exhaust system as well.

The Kawasaki ZX-10R design rendering has a different swingarm while the red monoshock links the rear end to the frame. Suspension wise, Kardesign kept the inverted Balance Free Front Fork with external compression chamber like the ZX-10RR model, but this time around the Showa fork looks more track-focused and has a shorter travel. The motorcycle design showcases Brembo radial calipers on the front and a Nissin caliper on the rear.

What is under the fairings is anybody’s guess. Most likely, if Kardesign would have made a design rendering of the engine, it would have been above the Kawasaki ZX-10RR’s maximum power figure with RAM Air pf 214 hp.

Too bad it’s just a design rendering and not a real motorcycle, but we like it anyway and who knows what the future holds.