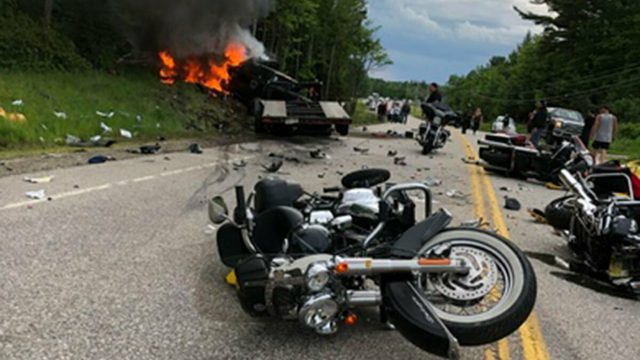 Volodymyr Zhukovskyy, 23, faces a prison sentence between 7 and 105 years after mowing down a group of 10 motorcyclists last Friday in New Hampshire, Massachusetts.

Reportedly, he is indicted with negligent driving and 7 counts of negligent homicide, to which a fugitive-from-justice charge is added. The New hampshire law says that negligent driving can be charged as a Class A or Class B felony, and it’s the judge’s task to decide whether the convictions will be applied concurrently or consecutively.

The smallest penalty leads to a prison sentence of at least 7 years, while the less-favorable verdict will have Zhukovskyy imprisoned for 105 years, sources say. The 7-year sentence corresponds to a Class B felony; if he will be found guilty of Class A felony, the minimal sentence is 15 years.

Last Friday, Volodymyr Zhukovskyy was driving a Dodge 2500 pick-up truck towing a flat-bed trailer and ended up on the wrong side of the road, head-on into a group of bikes and literally mowing down 10 riders approaching from the opposite direction.

The riders belonged to the the Marine JarHeads MC, a club that includes ex-United States Marines and their spouses, out for a ride in the area and and their annual meeting that weekend. In the crash, 7 riders were killed, inluding a husband and wife, and three sustained injuries. Zhukovskyy fled the scene and was arrested two days later at his parent’s house. He pleaded not guilty.

Zhukovskyy has two previous drunk-driving convictions, of which the latest last month. Allegedly, the investigators also found heroin residue in Zhukovskyy’s truck, but as he fled the scene of the crash and was ony apprehended a couple of days later, it will be difficult to establish if he was intoxicated when the accident took place.

His rap sheet also includes a license suspension for drunk driving, OUI and possession of drug paraphernalia. His driving license was suspended in June 2013 and reinstated in May 2017, after a suspension of the “youth alcohol program” he was part of.