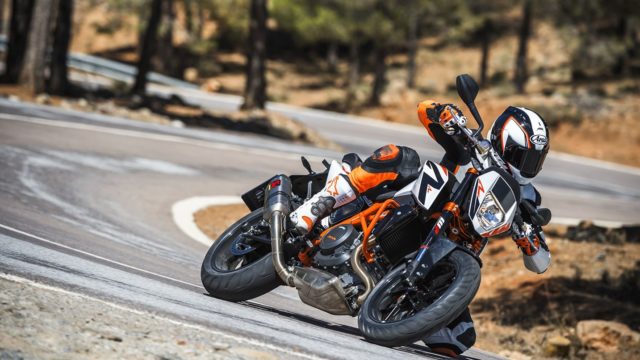 KTM 690 Duke is the most powerful single alive. The LC4 engine makes 73 horsepower and 74 NM of torque, due to a reworked cylinder head, a new piston and a rerouted air flow in the engine. The single cylinder gained 1,000 rpm more in the rev range, which should offer a better spread of torque and a vibe-less ride. The latter part should also be influenced by the second balancer shaft of the engine.

Although not having the same gizmos as his older brothers (Super Duke GT and Super Adventure), 690 Duke still has enough electronics to give you a both safe and sporty ride. The KTM naked has three riding modes connected to the traction control system and a motor slip regulation system which prevents the rear wheel from locking on abrupt shifts. Moreover, it has a supermoto mode which enables you to deactivate the ABS on the rear wheel only. This option lets you be a proper hooligan without losing the front.

Let there be light

KTM 690 Duke 2016 has a TFT color display – a fist on a KTM. The rev bar changes its color according to rpm and has a special color when the engine is still cold.

Another premiere on this KTM are the four illuminated keys on the left handlebar.

The suspension system was reworked, according to KTM. Both the upside-down WP fork and the pressurized-gas mono shock have different settings and offer “better corner carving”.

690 Duke 2016 should be an easy to ride everyday motorcycle due its 148.5 weight without fuel in the 14 liter tank. The electronics and ABS make it a viable option for beginners. It can be also restricted to A2 category – a very useful feature in Europe. But if you are a beginner and want to buy this bike, you should consider the seat height: at 835 mm, it’s not so short rider friendly.

KTM 690 Duke also has a more expensive and sporty R version. The Duke R comes with cornering ABS (MSC), a taller seat and an Akrapovic slip-on exhaust. In this version, the LC4 offers 75 horsepower instead of 73 and is capable of a sportier ride.