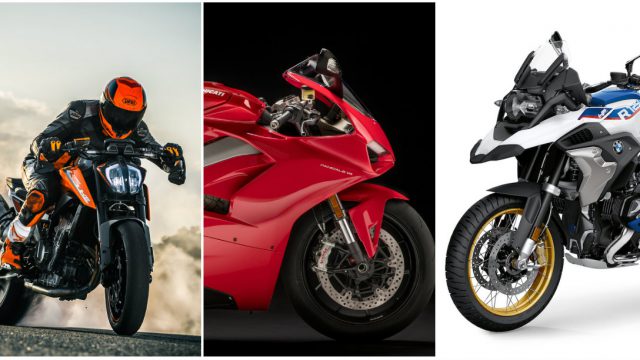 KTM tops the sales, BMW R1250GS is still the king, and Ducati Panigale V4 is a success

Motorcycle sales reached another year of growth with KTM/Husqvarna selling 280,099 units. Still, the best-selling European Bike is the R1250GS while Ducati's star is the Panigale V4. It was a good year for the motorcycle market.

BMW sold 175,162 motorcycles and scooters last year. This means an increase of 5.8% over the sales figures for 2018 (165,566 units), marking a new record. “2019 was another very successful year for BMW Motorrad in spite of a number of challenges. We achieved a sales record for the ninth time in succession", says Dr. Markus Schramm, Head of BMW Motorrad.

KTM ended 2019 with 234,449 motorcycles sold. So, what does this mean for the Austrian brand? Well, it’s the ninth year in a row that the KTM Group has a growth in motorcycle sales which represents a 4% increase in revenue at €1,520 billion.

Ducati has ended 2019 with 53,183 units sold in 90 countries. “2019 was a tough but also rewarding year. We're working to make Ducati the world's most desirable motorcycle brand," said Claudio Domenicali, CEO of Ducati.

For BMW the most successful model was the boxer-twin adventure bike, R1250GS/R1250GS Adventure with over 59,000 units sold which means one-third of the total sales figure. The total boxer-engined bikes sold are close to 90,000 units meaning over 50% of the total German’s brand motorcycle sales.

We have no detailed figures for KTM, but it is known that unlike BMW and Ducati, KTM has a strong dirt-bike portfolio. In fact, alongside Husqvarna, KTM is the enduro market leader.

Ducati achieved the world's best-selling superbike in 2019 with a market share of 25% thanks to the Panigale range with 8,304 unit sold. Other successful models for the Italian brand were the Multistrada 950 S and 1260 Enduro models which helped Ducati reach 12,160 units sold, a 3% growth for the Multistrada models compared with 2018 figures.

KTM claims a 12% share in the European market, 9.7% in the USA, and 7.3% in India, which is "the most important future market" for KTM. The Austrian brand managed to get a 35% sales increase in India.

BMW already presented three new models for the 2020 range: the F900R and F900XR middleweight twins and the exciting new S1000XR. However, the highlight for 2020 could be the R18, which will compete Harley-Davidson and which could get BMW a share of the American market.

KTM also comes with a strong line-up in the street sector for 2020: 1290 Super Duke R, 890 Duke R and the 390 Adventure. But it's not just that. The Pierer Mobility Group (KTM and Husqvarna) is about to integrate GasGas as the third brand of the group in 2020, and there's also an e-bicycle business (Pexco) to be integrated into the newly-founded Husqvara E-Bicycles.

Ducati's main star for 2020 is the Streetfighter V4, and the Bologna-based brand just unveiled a 500-units limited edition superbike – the stunning Superleggera V4. But the superbike game is getting tough, due to the new CBR1000RR Fireblade recently introduced by Honda.