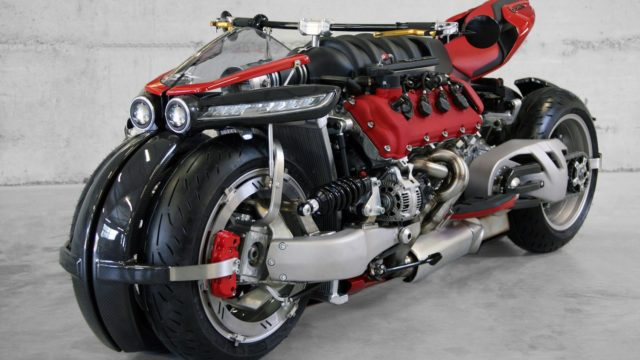 Lazareth LM847 is an outrageous machine which looks like a sort of motorcycle but is powered by a 4,7 liter Maserati V8 engine

Although it looks american, it’s built it France by Lazareth, famous for its quads, custom cars and motorcycles.

The 4,7 L, 32 valve V8 engine is capable of 470 horsepower@ 7.000 rpm, and a 620 Nm max torque. More than enough to move the 400 kg machine. The braking system should also be strong enough, with 420 mm front perimeter discs and 8 pistons Nissins. On the back we have 255 mm discs with 4 pistons Brembo calipers. The brake levers are reversed and the mechanism is found inside the handlebar.

Judging by the looks, it’s a kind of motorcycle. But you got four wheels. It angles thanks to a special design which includes independent suspensions.

Lazareth LM847 has only one gear, and the power is transmitted via a hydraulic coupler and two chains.

We don’t have the price yet, but it should be expensive. And yes, it works. You can see a kind of test ride below.