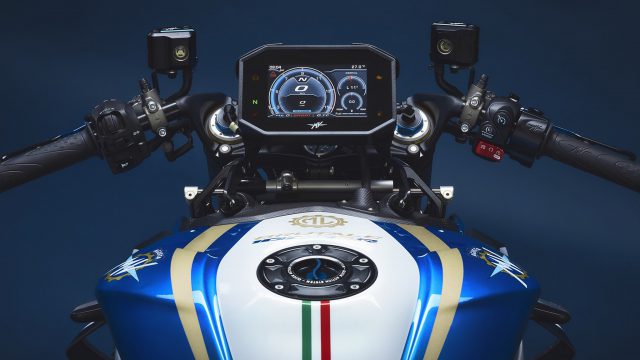 One naked bike that stands out from the crowd

MV Agusta released several photos on their official social media page of this Brutale 1000 RR ML model. The frame and swingarm are painted in matte gold while the forged aluminium rims feature black inserts. To make the motorcycle as rare as possible, the Italian manufacturer built just one unit.

Indeed, the MV Agusta Brutale 1000 RR ML shows that it’s number 001/001. That means there’s only one rider who will have the chance to own this motorcycle.

Behind the frame and swingarm matte gold paint scheme and the black inserts of the rims, the naked bike features a 998cc transverse inline-four engine making 205 hp. It’s equipped with the latest electronics and fitted with Öhlins suspension and Brembo brakes.

MV Agusta’s Senior Designer developed the bike starting from earlier limited edition models including the Brutale 910R Italia designed to commemorate Italy winning the 2006 Football World Cup. Back then, the owner of the brand, Claudio Castiglioni gave each of the Italian players and head coach a Brutale Italia model fitted with a metal plaque featuring their name.

Unfortunately for MV Agusta customers, the limited edition model is not available for purchase because it’s already sold to a customer whose initials are ML. There are no details regarding the owner of this MV Agusta Brutale 1000 RR ML, but in 2006, the Italian national team head coach was Marcello Lippi.