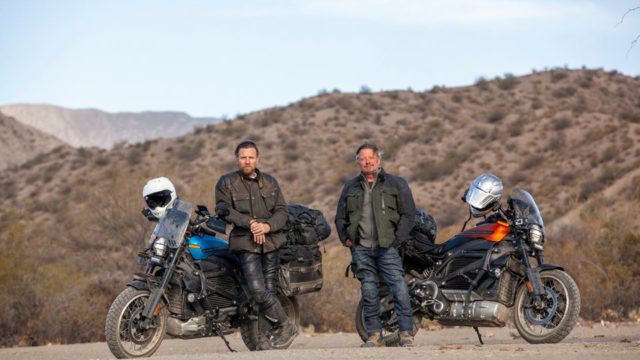 Long Way Up, Ewan McGregor and Charley Boorman’s adventure in the Americas will have its debut on 18th of September on Apple TV+.

The film will be aired as a TV series, with the first episodes to be released globally on September 18, while further episodes to appear weekly.

Besides some fan photos during the trip, there are no details about their journey. The trailer didn’t appear yet, but McGregor discussed about some problems they had at the “Tonight Show Starring Jimmy Fallon”.

“We camped in the garden, and we plugged-in. And when there’s two bikes charging at the same time, sometimes you could blow the fuses, which could be embarrassing”, said Ewan at the Tonight Show.

More than that, he admitted that he ran out of power for a couple of times.

Unlike the “Long Way Round” and “Long Way Down”, that were made on BMW GS Adventure bikes, the “Long Way Up” features Harley-Davidson’s LiveWire electric motorcycles.