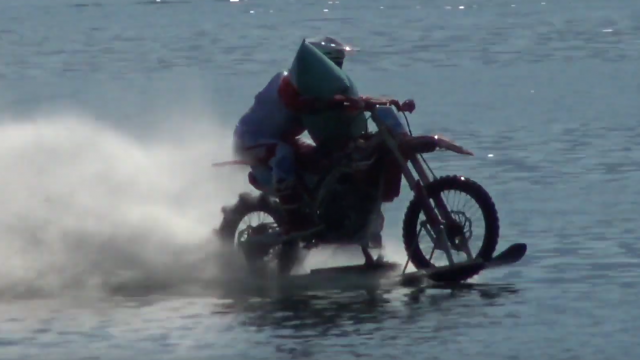 Motorbikes and water usually don’t do well, but if you’re Luca Colombo, things may look a bit different.

Riding a motorcycle on water is gradually becoming a new sport, after the insane stunt pulled by Robbie Maddison back in 2015 when he literally surfed a KTM 250 SX on a wave.

Now, water speed records are a thing, and Milan-based Luca Colombo is the new record holder, with a speed of 64 mph (~103 km/h), surpassing Maddison by a hefty 6 mph (9.6 km/h). Colombo even did this after a serious setback in the early stages of his race, when his flotation device inadvertently inflated, blocking most of his view. However, this didn’t cause Colombo to lose focus and he rode on like a blaze.

Previously, Luca Colombo also set a new distance record on the very same Lake Como, riding a modified Suzuki RMZ 450 for almost 5 kilometers. For the speed attempt, he changed his bike for a Honda CRF 450R, equipped with hidrofoils and a special rear tire to provide greater traction in water. As for the rest, the bike was stock, proving that Hondas make great bikes for breaking the craziest records.

Now it looks like it’s game on in the “motorcycles on water” segment, and we can’t wait to see what these daredevils come up with next. Jumps, watermotocross anyone?

Enjoy both Colombo’s and Maddison’s insane rides after the jump.