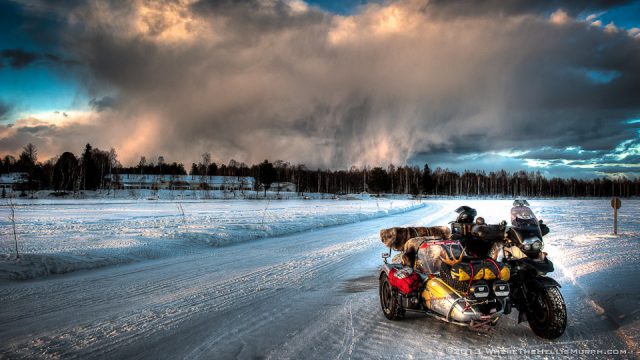 The thing to watch on a snowy day next to the chimney. Or radiator.

“I don’t miss anything from the normal life. I find that this is my normal.”

The words above are not a Dalai Lama smart-quote. It’s just something that a guy called Murph said about his unusual way of living his life.

Back in 2010, he set off on an RTW adventure. Three years later he was riding in snow and ice thanks to a Mobec Duo-Drive 2WD Sidecar used both for stability and for carrying all of his possessions. That’s because he didn’t plan to go back home. Wait, in fact, the road is its new home.

The interview below is not very recent, but it’s a nice piece of motivation.

Where the hell is Murph right now? We don't know. He disappeared from online since 2014. But we hope he’s doing ok, and he’s still on the road.

If he goes back to writing, you can find his stories on wherethehellismurph blog.