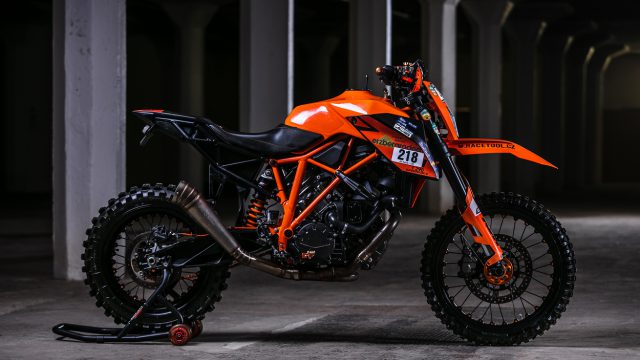 Enduro suspension, tough supernaked frame, 177 hp, and all in enduro form. Just a custom build, though…

KTM 1290 Super Enduro R was built by Jiří Heiník, motorcycle racer, with one goal in mind: to race at one of the world’s toughest hard enduro races – The Erzberg Rodeo.

Jiří Heiník is a Czech off-road motorcycle racer that loves challenges and riding enduro bikes. He raced a modified KTM 990 Supermoto R at the Pikes Peak International Hill Climb race in the United States in 2012. Also named The Race to the Clouds, it is a competition at the Pikes Peak mountain in Colorado, USA, 19.99 km long, with 156 turns on public roads. Furthermore, racers climb 1,440 meters from 2,862 meters. The Start Line is at Mile 7 marker on the Pikes Peak Highway and at 4,300 meters is the Finish Line at the mountain’s summit.

And at the age of 65, Jiří Heiník raced at the world’s most famous extreme enduro race — the Erzberg Rodeo and the Iron Road Prologue. You might think that a good enduro bike for the job would be a KTM 450 EXC-F, but not for Jiří Heiník. In 2018, he raced at Desert Bomber twin-class of the Erzberg Rodeo.

The 75-degree V-twin LC8 177 hp engine and the frame from the KTM 2015 KTM 1290 Super Duke R was kept. The job was done by Prague’s RaceTool KTM — the biggest KTM dealer in the Czech Republic. The team focused also on enduro riding by reshaping the tank, and adding handguards, a high fender, and replacing the headlight cluster with a streamlined motocross unit.

“The goal was to build it as light and as thin as a single-cylinder bike, but with the devastating power of a fully tuned LC8 engine,” Jiří Heiník said.

“The KTM 1290 Super Enduro R is not an exhibition show bike, it is ready to race and the most powerful twin enduro bike ever built,” he concluded.

The Erzberg Rodeo, in Austria, is one of the most famous hard enduro bike races in the world, also known as the Iron Giant. The event gathers 1,500 riders from all over the world and only 500 of them start the race together. The main event is the Hare Scramble, a 35 km track covered by the riders in around 90 minutes, the fast riders that manage to finish the race. For example, in 2019, at the main event which is the Hare Scramble, only 16 riders crossed the final checkpoint.