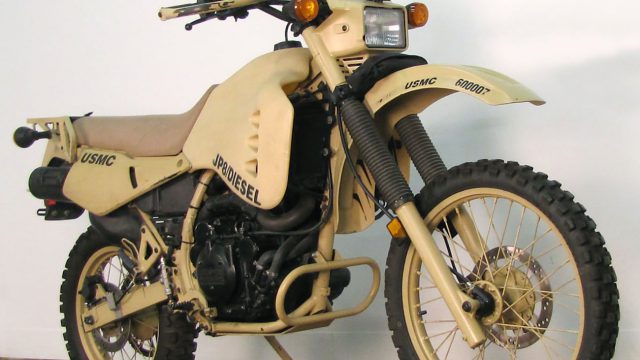 Hayes M1030-M1 is the name of this motorcycle which is based on a Kawasaki KLR650. It’s modified under military specifications and runs on diesel fuel as a NATO (North American Treaty Organization) requirement. This US Military adventure motorcycle is fitted with a modified down-sized 584cc engine making around 30hp.

Hayes Diversified Technologies (HDT) of Hesperia, California, designed this Kawasaki KLR 650. It’s a 2004 model motorcycle and it had to undergo a couple of modifications to make the adventure motorcycle suitable for the US Military. Thus the Hayes M1030-M1 has a water-cooled engine downsized to 584cc (some models used 611cc displacements), stock Kawasaki main cases and five-speed transmission. The engine was customized to run on diesel fuel or biodiesel in peacetime, and on JP8 aviation fuel or kerosene in time of war as a requirement by NATO which enforces all vehicles from tanks to jeeps to run on diesel fuel. 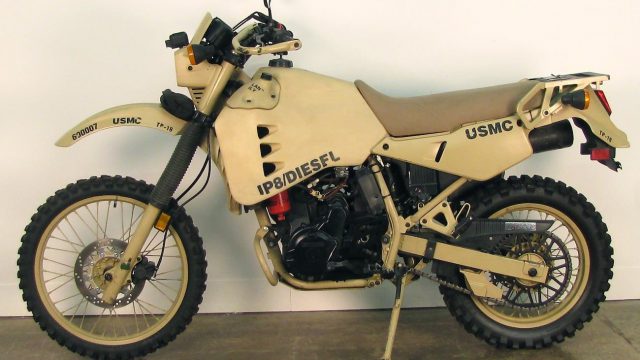 HDT modified the engine which now has a new piston, cylinder and 100mm by 83mm bore and stroke. Although w might expect a power boost, actually the engine makes around 30 hp and the Hayes M1030-M1 can reach a top speed of 85 mph. There’s also a larger displacement version which has a 670cc engine reaching a top speed of 121.2 mph. That model was designed to compete at the Bonneville Salt Flats. The owner of the bike, Fred Hayes, raced it at the Vetter Fuel Challenge as a streamliner and managed to reach 162 miles per gallon on diesel. The performance was good enough to gain a couple of wins in the motorcycle’s class from 2010 to 2014. 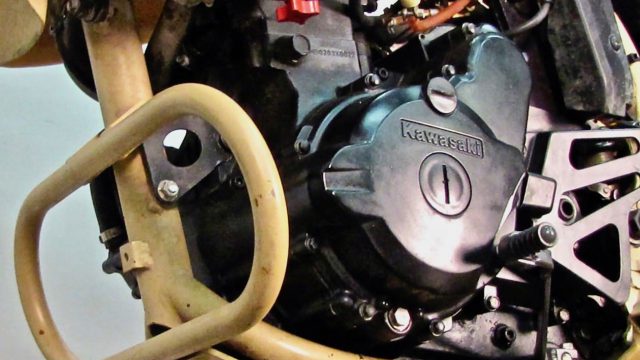 Moreover, the Hayes M1030-M1 had to fit Army and Marine Corps requirements and it was fitted black-out lights and the engine was designed to achieve a range of 400 miles on a tank of fuel. Other features include a braking system with a 280mm front rotor while the bike’s weight sits at 390 pounds. 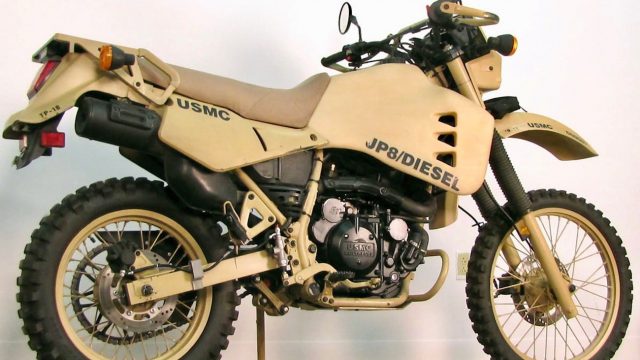 HDT M1030-M1 was manufactured between 2004 and 2008. The U.S. Marine Corps purchased 440 units while British and European NATO countries bought an unspecified number of units. It’s quite interesting to see that a petrol engine Kawasaki KLR650 can receive an upgrade to make it run on diesel fuel and we’re curious to see what is the price tag for such a military motorcycle. 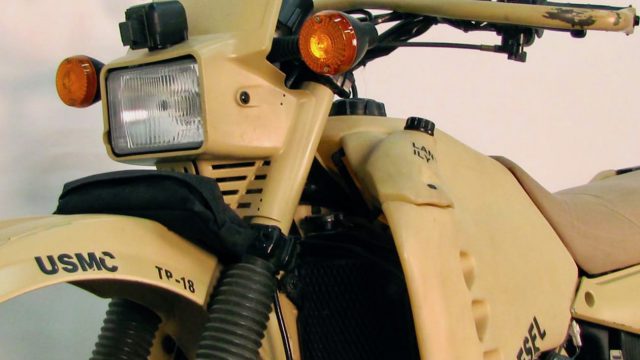