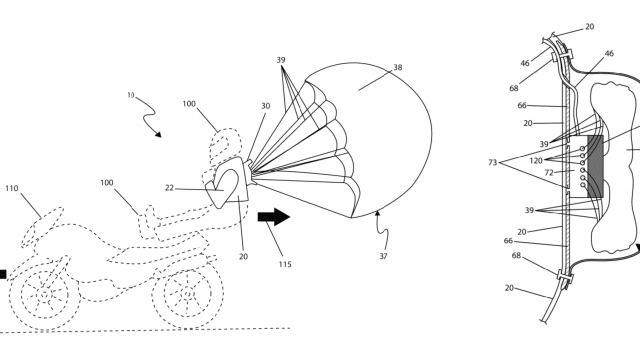 “The Launch Jacket” will eject you from harm’s way. Literary

In 2012, Corey received a utility patent by the United States Patent and Trademark office for his jacket idea. With the help of a parachute that can be manually activated by the rider or automatically triggered, the launch jacket pulls the rider away from the danger. Not paragliding up in the air, but similar to fighter planes ejection seat. The principle is to hold back the rider from being thrown into other objects or to get pulled underneath the bike.

The ambitious inventor is very concerned by the lack of options in the motorcycle safety options. So he came up with this alternative to help riders not only on the street segment but also for stunts and competitions. He calls it a bailout option that riders currently don’t have.

The invention of a parachute would be the natural step in terms of motorcycle safety. With the airbag jacket on the market, we have to wait and wait nicely and choose our parachute colour. Corey’s project is at an early phase and can be found on kickstarter.com in search of development and test budget. Who knows? Maybe this will be the next trend for the following decade.

One thought on “Moto-Parachute. Is This the Ultimate Safety Gear?”