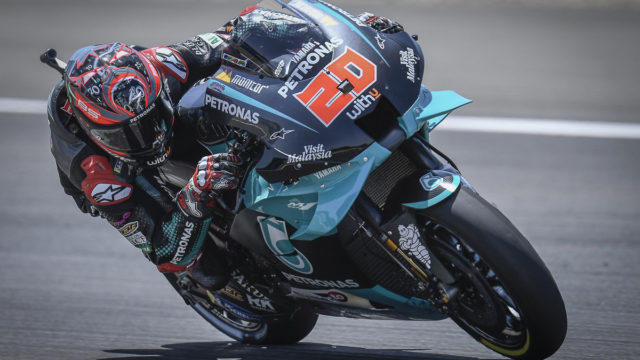 Last weekend, MotoGP returned to the track in Spain, at the Jerez track. It was a racing weekend full of shocking events. Fabio Quartararo became the first French rider to win a MotoGP race in the past 21 years. Unfortunately, Marc Marquez had a big high side crash which left him with a broken right arm while Alex Rins and Cal Crutchlow were unable to compete in the race due to injuries.

It all started in the qualifying session. Alex Rins (Team Suzuki Ecstar) was pushing hard at the end of Q2 to achieve a good grid position and unfortunately crashed at Turn 11. He was taken to the medical center where MotoGP Traumatology Specialist Dr Mir confirmed that the rider has a fracture-dislocation of his right shoulder and he’s unfit to race. The rider was taken to the Jerez hospital for an MRI scan to see the degree of his injury.

After the Q2 crashes of Rins, Andrea Dovizioso (Ducati Team) and Jack Miller (Pramac Racing) the next day it was time for the Warm Up session to prepare the riders for the race and make all the last adjustments to the MotoGP bikes. This time around, it was Cal Crutchlow (LCR Honda Castrol) who suffered a crash at Turn 8. He was taken to the Jerez hospital for a CAT scan where the doctors said that the rider was unfit to race due to his injuries. Later scans indicated the British rider suffered a tiny fracture to the left scaphoid bone and he’ll need to undergo arthroscopic surgery to recover.

It was time for racing with Quartararo (Petronas Yamaha SRT) starting from pole position after he managed to break the Jerez track record in Q2 Saturday while on the front row of the grid he was followed by Maverick Viñales (Monster Energy Yamaha MotoGP) and Marc Marquez (Repsol Honda Team).

The Spanish rider was leading the race in the early laps until a certain point at Turn 4 where his MotoGP bike was near a low side. Marc Marquez managed to save the bike from crashing and had to go through the circuit’s gravel to get back on track. He rejoined the group in P16 and was in full attack mode passing all his rivals to reach P3. It was an outstanding comeback for Marquez as he was fighting for second place in the race.  Unfortunately, the rider suffered a high-side on the exit of Turn 3 and had a heavy crash. He was taken to the medical centre and MotoGP Traumatology Specialist Dr Mir confirmed that Marquez suffered a fractured humerus in the crash. It was a result of a direct impact of the bike’s tyre to the right arm which resulted in a fracture to the shaft of the humerus. Thus, Marquez will go to Barcelona to have surgery and recover. At the moment there’s no news regarding if Marc Marquez will be fit to race on July 26 at the Jerez track for the third round of the MotoGP 2020 season.

It was a great day for Petronas Yamaha SRT rider Fabio Quartararo. The Frenchman won the Jerez race and became the first satellite Yamaha winner in MotoGP and the first French premier class winner since Regis Laconi at the 1999 Valencia GP. After finishing second five times in 2019, the rider finally achieved to win a MotoGP race. Moreover, Quartararo’s win made him the eighth-youngest rider to win in the premier class of Grand Prix racing at 21 years and 90 days old. This may not say much to most of us, but the French rider won a MotoGP race at a younger age than the nine-time World Champion Valentino Rossi (Monster Energy Yamaha MotoGP) which was 21 years and 144 days when the Italian won at Donington Park in 2000. Thus, it looks like Quartararo is a serious MotoGP title contender for this season alongside Maverick Viñales, Marc Marquez and Andrea Dovizioso at this stage of the season. Furthermore, the MotoGP 2020 season has fewer races that last year due to the health and flight restrictions, so any crash of mistakes counts heavily in the rider’s standings.

The Italian rider qualified 11th on the grid and it seems that Valentino Rossi still has some problems with the rear tyre grip on his Yamaha MotoGP bike. Michelin head chief Piero Taramasso said that the main concern with the grip on the rear tyre is regarding Rossi’s riding style. Taramasso believes that Rossi is overheating the rear tyre because he doesn’t hang off the M1 enough. The rider, on the other hand, had some issues with the tyre performance and his racing pace at the Jerez track. On top of that, with eight laps to go, Rossi had some technical problems with his bike due to a red alarm displaying on his dash and had to retire from the race.

The 2020 MotoGP season continues with the third round which will be held between 24-26 of July at the Gran Premio Red Bull de Andalucía in Spain on the Jerez track.