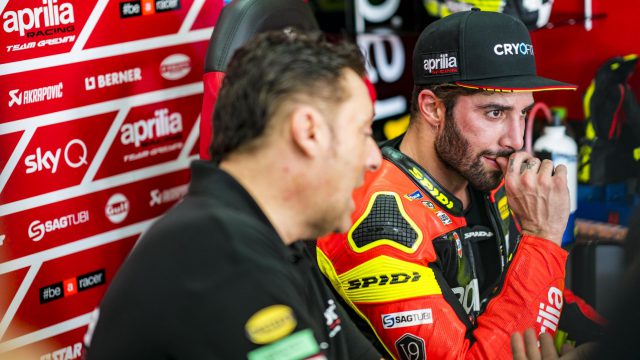 Iannone drug test is positive. Is the Italian facing an official suspension by FIM?

Aprilia MotoGP’s rider Iannone B sample drug test results came in. And they are positive. Aprilia said a couple of days ago that Bradley Smith is set to replace the rider.

Iannone received a provisional suspension by the Fédération Internationale de Motocyclisme (FIM) back in December last year. When an Exogenous Anabolic-Androgenic Steroid called drostanolone was found in a urine sample at a test during the 2019 Malaysian MotoGP round, he was banned to race in any motorcycling competition.

He remained calm on this matter and received a chance for a B sample test to be taken. According to La Gazetta dello Sport the results are positive. It’s not often we see official suspensions for motorcycle racers and by the look of it, MotoGP is taking thinks seriously.

In an interview with Iannone’s Antonio De Rensis, it was reported that the source of this issue might have been contaminated meat.

“The counter analysis should attest to the presence of metabolites equal to 1,150 nanograms per millilitre, a small quantity, considering also that the rider had been in Asia for over a month and that the test, performed immediately after the GP, was relative to a urine sample very dense, equal to 1.024, due to strong dehydration after the race,” Gazzetta quotes Iannone's lawyer as saying.

No word yet from FIM about what will happen with Iannone for the 2020 MotoGP season and if he will be officially suspended from motorcycle racing.

According to Crash, Iannone’s lawyers can prepare a case for a disciplinary hearing with an issued verdict no less than 45 days from now. So, unlikely chances for a quick resolution.

Taking this into count, Iannone may miss the two MotoGP pre-season test in Sepang scheduled for February. And maybe the first round of the 2020 MotoGP season too.

Aprilia Racing CEO, Massimo Rivola, said that Bradley Smith is ready to replace the Italian rider. So, at the moment we just have to wait and see what the future has in store for Iannone.