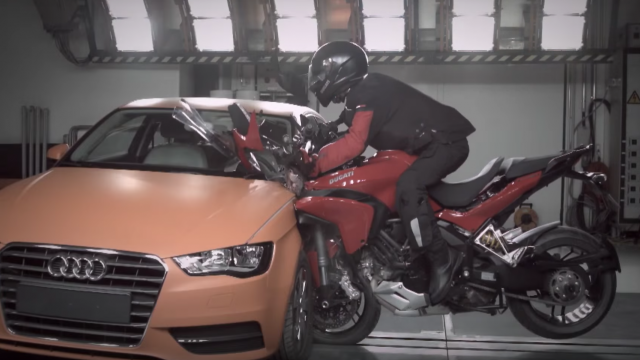 This is how a moto vs. car crash test looks like. It was made by Ducati to introduce its Multistrada 1200 S Touring D|air model, featuring an integrated safety system wirelessly connected to a Ducati branded Danes airbag jacket.

Watch the video below and turn low the audio volume – the background music is very annoying.

The system uses sensors built into the Multistrada 1200 S Touring's electronics to constantly understand the vehicle's dynamic situation, deploying when subjected to a genuine accident scenario. The Multistrada D|air system completes the data analysis and airbag deployment inside both the rider and passenger jackets in just 45 milliseconds.

This intelligence comes from a sophisticated algorithm, which manages data delivered from two triple-axis accelerometers fixed to the left and right fork bottoms of the Multistrada‟s front suspension and an additional two rear triple-axis accelerometers mounted in the D|air Electronic Control Unit (ECU) positioned under the seat. When the sensors detect a potentially dangerous crash scenario, an algorithm is triggered which takes just 25 milliseconds to decide if airbag deployment is necessary or not. If deployment is necessary the D|air ECU onboard the Multistrada, which is continuously in bi-directional radio contact between the system and the Dainese jackets, initiates and completes airbag inflation in just 20 milliseconds, a total of 45 milliseconds from the start of impact.

The system adds just 1kg to the Multistrada and the only visual difference to the model is the addition of an extra LED display on the main instrumentation that constantly provides the system's active status.