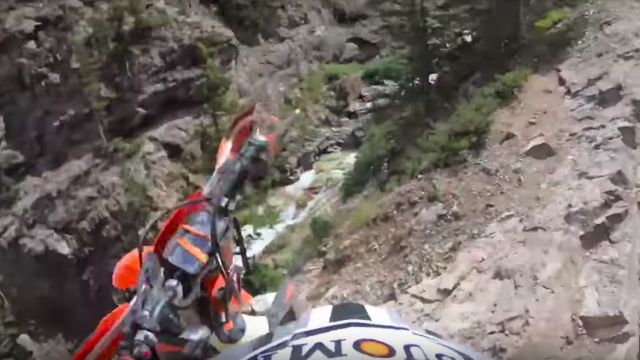 Rick Hogge is from Texas. It was a sunny September day when he went out for a ride with his friends in Colorado on his brand new KTM enduro bike. They chose a technical rocky trail on the edge of a canyon. At the moment he was on a narrow section, he lost the front end, sliding about 20 meters (70 ft) in the river together with the bike.

The moment was captured by his helmet-mounted camera.

Fortunately, the film comes with a happy ending, at least for the rider – he’s fine, no wounds. “The front tire shot to the left, and when that did, my throttle hand activated the throttle,” says Rick after the incident, mentioning that he needed more momentum.

As for the bike, they managed to recover it from the canyon, but we’re not sure about its condition.