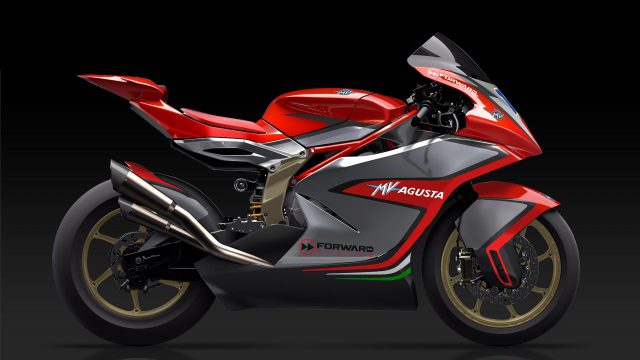 MV Agusta, the most successful manufacturer in road racing, is back in the top game with a Moto2 race bike powered by a Triumph engine. MotoGP dreams, anyone?

MV Agusta is back in top-level road racing with a planned entry in Moto2. The announcement marks a historical milestone as House Varese returns to the big game more than four decades after their golden age. However, hopes are high, as the Italians teamed up with two other strong names in the business, Forward Racing and Triumph.

With a rich heritage and massive expertise in motorcycle engineering, Triumph was chosen to supply the engine that will power MV Agusta’s Moto2 machine. We’re talking about the 765cc triple that is slated to become the standard Moto2 mill from 2019 onwards, but no final figures are now available as to how powerful it will be.

On the other hand, Forward Racing have also had their share of MotoGP glory back in the days of the Open Class, winning a title in 2014 with Aleix Espargaro. Forward are also accustomed to winning in Moto2 and are one of the main players in the class.

The design of the Moto2 MV Agusta resembles to that of the F3, with certain cues that also bring the F4 bikes to mind. The looks of the Varese machine are, however, impossible to mistake for other brand, even though the three-pipe stacked exhaust was changed. MV Agusta will develop their own frame, a mix of tubular trellis and cast elements.

The most successful European motorcycle maker ever, MV Agusta won no less than 75 world titles, 38 rider and 37 manufacturer, between 1952 and 1974, with huge names riding their machines. The list includes Carlo Ubbiali, John Surtees, Mike Hailwood, Phil Read and the mighty Giacomo Agostini.

The road that lies ahead for House Varese is not going to be an easy one, nor will their efforts be rewarded from the first races. MV Agusta plans to have this bike on the track at the end of July for the first real-life tests. Stay tuned for more.