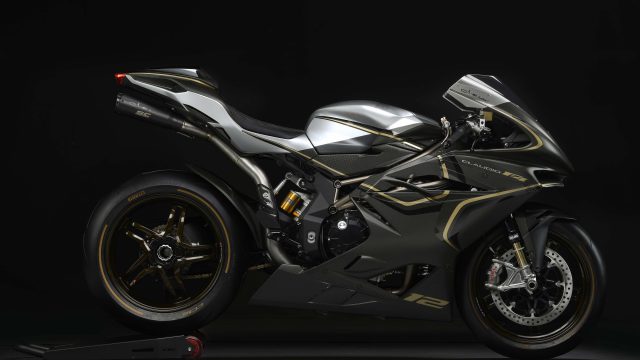 One last hommage before the 2020 retiremnt of the famous F4

Everybody knows that the folks at MV Agusta are very attached to their famous F4 and for the people behind the brand. So the company came up with a limited edition series that might be the sexiest superbike they’ve ever released. Unfortunately, only 100 units of the MV Agusta F4 Claudio will be produced.

There’s no shortage of exotic parts on the F4 Claudio, from top to bottom the bike screams performance. Under the skirt is an MV Agusta F4 RC so, things are pretty insane when you look at the numbers. The engine produces 205 hp and its street legal, and if you add the SC-Project racing exhaust system, the power jumps to 212 hp. The Reparto Corse division left their print on the cylinder head by creating new intake and exhaust ports that help the gasses flow freely. There are also some innovations like the DLC cam followers and Asso compression rings that are meant to reduce the friction inside the engine.

The new technologies applied for the Claudio might be the starting ground for the new superbike MV Agusta is working on. The Varese company promised to come up with a new revolutionary litre bike as the current V4 will not be able to cope with future the emission regulations.

The F4 Claudio will be complemented by carbon fibre fairing and a set of BST carbon fibre wheels. The weight figure stands at 385 lbs dry with the race kit on and 403 lbs in street trim. The suspension system will be full Ohlins with a NIX30 for the front TTX36 on the rear. With such exclusive parts, a Brembo braking system was a must. For the front rotors, MV Agusta fitted a set of Brembo T-Drive and Stilema callipers.

If you choose to go racing the F4 Claudio will feature an integrated data acquisition system with the help of the AIM MXS dash. The bike will also have an eight-stage traction control system and an up and down quickshifter.

The hard part comes when you decide to buy one because the MV Agusta F4 Claudio will go for $83000. If the price is close to your range, you will still have to wait until June 2019 for the folks at MV to deliver it.