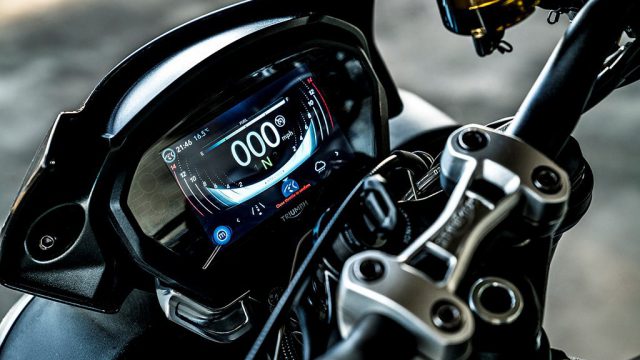 The 2017 Triumph Street Triple was revealed. Here’s what you must know about it

Derived from Daytona 675 power unit. 80 new parts. It will be the base model for the future Moto2 engine.

The old engine was capable of 105 horsepower.

Even the entry-level Street Triple got a suspension update, but it’s the RS who gets our attention.

The RS version gets superbike-spec Brembo calipers, while the S only comes with two-piston Nissins.

The Street Triple R and Street Triple RS get a full-color TFT dashboard with six display styles. It’s controlled by a new handlebar 5-way joystick. The S version gets and old-school dash.

Even the Bonneville family got the ride-by-wire technology, so it’s no wonder that Street Triple will come with an electronic acceleration control. It’s the parameters and set-up that makes the difference between the three versions.

There is no banking angle sensor available, so there is no cornering ABS.