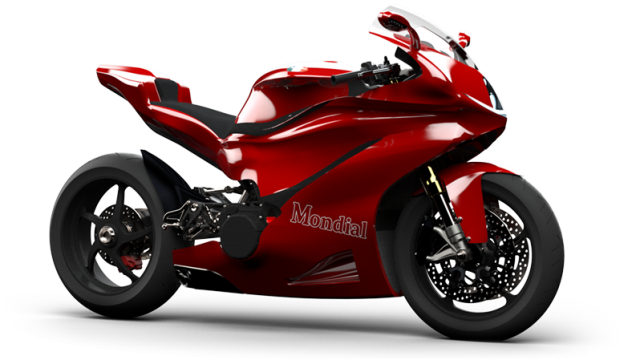 Italy and US-based Mondial Moto announces a new sport bike powered by a striking V5 engine that makes north of 200 HP, has a titanium or carbon body and retails for as low as €28,000

According to the latest news arriving from bike makers Mondial Moto, we’re in for a flabbergasting appearance at next year’s EICMA show in Milan. Mondial Moto says their creation is a liter-class superbike powered by an all-new V5 engine that is capable of producing in excess of 200 HP, and which will take the sport bike market by storm.

It’s not the first time when we hear such bold declarations, but the producer says they’ve already secured some 2.5 million Euro for the development of the V5R and V5S machines, and that they are indeed going to build them. In fact, they are already taking reservations for as low as €10k, with limited availability.

The two machines are touted to bring some of the most advanced technologies used in MotoGP to the street level, in two packages that address the needs of the most discerning sport riders. We don’t have any info as to how well-acquainted Mondial Moto are to Grand Prix racing, but we DO know that a MotoGP package comes with a six-figure price tag. So far, we saw that the R-spec machine comes with a carbon fiber body, whereas the S-machine has a body that also makes use of titanium.

These V5 bikes tip the scales at 179 kg (395 lbs) and their engine revs past the 13,000 RPM bar. The front line has three cylinders, with the remaining two in the rear, angled at 75.5 degrees. Both the inlet and outlet valves are made from titanium, and so are the connecting rods. A cassette-type close-ratio 6-speed transmission equips both V5 bikes.

One of the biggest differences between these two bikes is the frame. While both sport an integrated airbox, the frame and subframe of the V5R is made from carbon, with a single-sided alloy swingarm. The V5S comes with a monocoque frame made from aluminium, with a similar swingarm. The former has carbon fiber 17” wheels, while the latter comes with OZ forged rims. Braking power comes from radial Brembo monoblock calipers with dual 320mm front rotors, and suspensions are supplied by Ohlins, front and rear, electronically adjustable and aided by a steering damper.

Making the big picture even more interesting, Mondial Moto throws in an all-digital dashboard with comprehensive instrumentation that includes satellite navigation, race modes and lap timers, a programmable ECU in addition to other high-tech features, such as keyless remote, remote start, electronic steering lock, plus an alarm.

These bikes and their spec lists almost look too good to be true, and we’ll keep an eye on Mondial Moto to check with their progress.