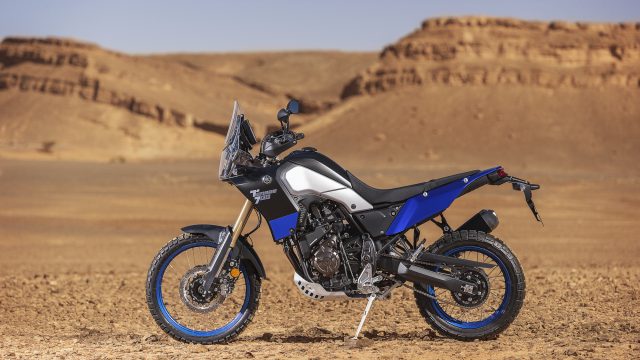 Yamaha just unveiled the Tenere 700 in its final shape. Actually, it’s the prototype we spotted last year at the EICMA, but now we also have the tech specs. Here are the main figures: 72 hp from the CP2 parallel twin engine, 21 front/ 18 rear, tube-type tires, switchable ABS.

No traction control, no riding modes, no rider aids. Just a simple adventure bike, with a more dirt-road approach than touring capabilities. At least, that seat doesn’t seem to be very comfortable for touring.

The new Tenere 700 seems to be ready for adventure – a big and tough aluminium engine shield, radiator protections, hand-guards, high ground clearance and a high seat – 880 mm, so this could be a problem for the short riders.

There’s a bad news also – although this is the final version, we still have to wait a bit until it hits the market. Yamaha says that it will arrive to the European market in the second half of 2019, while the U.S. market will see the bike a bit later.

We just got back from the Yamaha Press Conference in Milan and this is the new Yamaha Tenere 700. Watch the movie in the window below or directly on our

Besides the Tenere 700, Yamaha came up with a GT version for its Niken three-wheeler and with some special editions for XSR 700 – a Scrambler that commemorates the XT500 from 1981, a YZF-R1 with a limited paint job and an IronMax version for its scooters. More than that, Yamaha unveiled a 300 cc three-wheeler which was shown as a concept.