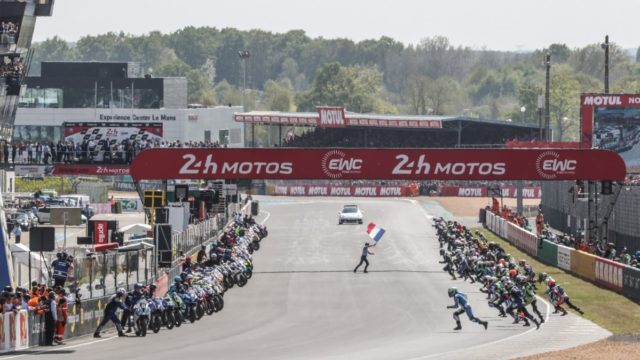 FIM announced that the 43rd edition of the 24 Heures Motos which will take place on 29 and 30 August on the Bugatti circuit at Le Mans in France is held behind closed doors. The decision is enforced by the current French government measures to provide the health of riders, fans and all those involved in the FIM EWC (Endurance World Championship). The good news is that ticket holders will receive a credit.

The 2020 24 Heures Motos will be held behind closed doors at the end of August because of the global health crisis, which has led to restrictions being imposed on public gatherings in France and on travel to and from some countries.

The 43rd edition of the 24 Heures Motos will take place without spectators present on 29 and 30 August on the Bugatti circuit at Le Mans in order to comply with French government measures and safeguard the health of riders, fans and all those involved in the FIM EWC.

The International Motorcycling Federation (FIM), race organizer Automobile Club de l’Ouest and Eurosport Events, the promoter of the FIM EWC, have decided to hold the third round of the 2019-2020 season behind closed doors.

Ticket holders will receive a credit. Details can be found on the ACO website.

"An unprecedented situation means exceptional measures. The 43rd 24H Motos will take place behind closed doors, but it will go ahead. That’s the most important thing. Especially for our teams, partners, the FIM EWC and for motorcycle racing in general. It will be strange to hold a race with no fans trackside but we will do our very best to bring all the action and excitement to them, wherever they are."

“This was a tough decision for the ACO and we are backing it. An event behind closed doors is totally contrary to the sharing and sense of community that are the inherent values of motorcycle endurance racing, but ensuring the world championship’s continuity is the absolute priority in the current health situation to protect teams. As promoter and producer of footage, we at Eurosport Events will redouble our efforts to transport fans to the heart of the action at 24 Heures Motos with our TV programmes and digital content, giving special consideration to all those who were looking forward to getting together at Le Mans.”

"I would simply like to thank the ACO for allowing us to be able to live this legendary event, even behind closed doors. We salute the incredible effort provided by this great club and also by our promoter Eurosport Events which I am sure will produce even more spectacular images.”