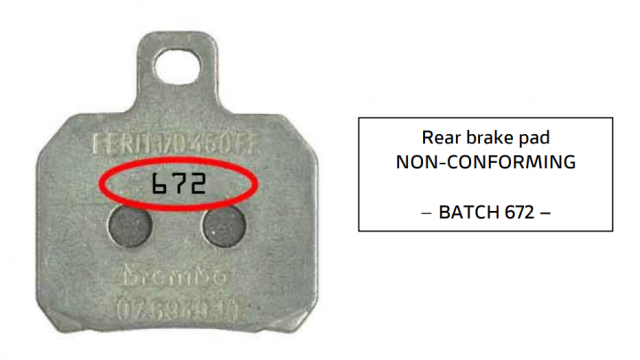 Brembo and Ducati started a recall campaign that will certainly spread to other sport bike manufacturers. A batch of defective rear brake pads was detected, and using these pads may put riders in danger.

It’s not the first recall for famed brake componentry makers Brembo, as at the end of 2017 and early in 2018, a defective master cylinder for front brakes was recalled. However, it looks like the fault does not lie with Brembo this time, but with one of the companies in the supply chain.

Namely, it’s another Italian company, Federal Mogul, who delivers the friction pads themselves. Official sources mention that there was a human error in the manufacturing process of Batch #672. Exposure to higher temperatures than specified in the product sheet caused the friction pad material to bond improperly to the metal backing plate.

In some cases the material started to come off the said plates, leading to reduced deceleration and the lengthening the braking/stopping distance. Such a thing can occur without any warning signs, and is a major safety hazard.

The first bikes that were affected by the recall are 2018 model year Ducati Panigale V4, Ducati Hypermotard 939, Ducati 1299 R FE and the Ducati 959 Panigale. As Brembo is the first choice for many manufacturers of sport bikes, we should expect multiple recalls triggered by the same defect. Ducati was the first manufacturer to take matters in their own hands, notifying the owners of the affected bikes and scheduling a free repair.

The brake pad production at Federal Mogul was already changed to a production line with a better temperature process control. Fortunately, according to the NHTSA, no incidents were reported at the time of writing, no injuries or property damage.

Ducati dealers will inspect the rear brakes of the recalled motorcycles and replace the defective pads with new ones, with the same part number but from a different batch. Remains to be seen how much will the infamous Batch 672 affect the rest of the industry.