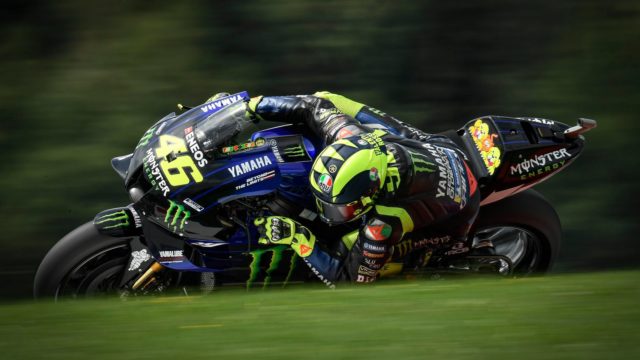 Last weekend, the MotoGP riders went to Austria for the Red Bull Ring Round of the 2020 season. On Lap 9, a few metres behind Valentino Rossi and teammate Maverick Vinales, Johann Zarco (Esponsorama Racing) and Franco Morbidelli (Petronas Yamaha SRT) collided and crashed heading into the braking zone of Turn 3, when both were riding at around 300 kph. The crashing MotoGP bikes were flying towards the Monster Energy Yamaha MotoGP riders. Fortunately, Rossi and Vinales managed to narrowly avoid the incident.

It was a MotoGP race packed with a lot of action, crashes, head-to-head racing and overtakes. Although, it was a good day for Andrea Dovizioso (Ducati Team) who won the race in front of Joan Mir (Team Suzuki Ecstar) and Jack Miller (Pramac Racing) who completed the podium. Even though Dovizioso was victorious one day after he announced he’ll split with Ducati at the end of the 2020 MotoGP season, the talking point of the Austrian Grand Prix was the high-speed crash between Franco Morbidelli and Johann Zarco, which saw Rossi and Vinales nearly escape the scary crash.

Morbidelli and Zarco were side by side on the straight with the Italian rider in the Frenchman’s slipstream into Turn 3. Zarco ran wide before braking for the next corner and Morbidelli couldn’t avoid his bike and both riders collided and went down leaving their MotoGP bikes sliding on the grass and heading to the hairpin. The rider’s bikes started to tumble into the air moving straight to Rossi and Vinales who were tackling the hairpin. Thankfully, the Yamaha and Ducati MotoGP bikes missed the two factory Yamaha riders. Morbidelli’s bike arrowed through the gap between Vinales and Rossi, missing the nine-time World Champion by a matter of inches, with Zarco’s bike narrowly avoiding Vinales. Fortunately, Morbidelli and Zarco were both on their feet after one of the scariest incidents in MotoGP history. They both went to the medical centre for a check-up, and both were declared fit. The race was red-flagged to allow the marshals to clear the track and fix the air-fence where the two MotoGP bikes stopped. The race restarted where Dovizioso managed to win.

When Johann Zarco and Franco Morbidelli collided and crashed heading into the braking zone of Turn 3, Vinales and Rossi were hard on the brakes and tipping into the corner, focusing on a good exit down the next long straight. What the two Monster Energy Yamaha MotoGP riders didn’t know was what is going on behind them – both stricken Yamaha and Ducati bikes were flying towards them at a very high speed.

In a fortunate sight of events, Morbidelli’s bike shot straight through the gap that separated Vinales and Rossi. The Petronas Yamaha was literally inches away from hitting Rossi while in the same time Zarco’s bike almost hit Vinales. The race was red-flagged and scheduled to restart after the marshals cleared the track. It was a lucky moment for all four riders involved as they managed to walk away from the scary crash unhurt as we can see in the video below posted by MotoGP FANaddict.

Rossi’s reaction coming back into pitlane after the red flags said it all. The Italian rider knew he managed to dodge a bullet and couldn’t believe what had just happened as he was shaking his head a couple of times and couldn’t believe how close he came to have a serious injury looking at the crash replay.

“Yes, it was… very, very scary,” said Rossi. “All four riders, but especially me and Maverick, we were very lucky. We have to pray to somebody tonight. Because the situation was very dangerous. I think that it’s good to be aggressive for sure, everyone is trying their maximum, but for me, we don’t have to exaggerate. Because we need to remember this sport is very dangerous. You need to have respect for your rivals, especially at a track where you go 300 kph.

“I have spoken with Zarco already, he promised me he didn’t do it on purpose because he went very wide when braking and he shut the door in the face of Franco. With these bikes, at 300 kph you have the slipstream, so Franco didn’t have any chance to brake. After I was with Maverick, entering Turn 3, I felt something arrive. I thought that it was the shadow of the helicopter because sometimes it comes across the track but after Franco’s bike arrived at an incredible speed. Also, Zarco’s bike jumped over Viñales. So we were very lucky. But I hope these types of things are important to improve the behaviour of the riders in the future.”

“I spoke with Franco. He is ok, he tried to not think (about it) but when he does, it scares him. But on this occasion, what made the difference was – nobody was hurt. All four riders are ok, this changes the situation. If something bad happened, it’s completely different.”

“It was difficult to restart, sincerely, but I didn’t have a lot of choices. So I restarted and in the race I was good, I did a good race. For us, with the Yamaha, here is not easy because we suffer with top speed so it’s very difficult to fight with the other bikes, but I had a good pace.

“Unfortunately I had a very, very aggressive overtake from Binder at Turn 9 that pushed me out of the track. We lost a lot of time and lost the first group. But anyway from that moment I still had quite a good rhythm, and I could arrive in P5. I think we could have done better but anyway it was a good race,” concluded Rossi.

The nine times MotoGP World Champion regrouped and returned on his Yamaha MotoGP bike for the race restart where he crossed the finish line fifth which marked the best place for Yamaha riders at the Austrian Grand Prix. Maverick Vinales finished the race in tenth. The 2020 MotoGP season continues with the Styrian GP starting on Friday, August 21st when the race is scheduled on the Red Bull Ring track.